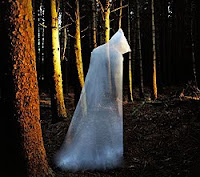 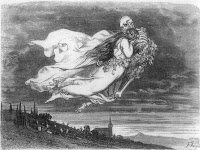 Ritual and Tradition in the Turning Wheel

As the wheel of the Year turns and the days of Autumn are upon us, the feast of the Pagan Calander, Samhain or New Year’s draws ever closer. Once the apex of social events - the great feast that would warm in memory throughout the bitter winter, the last chance to see the family, including one’s ancestors, before the dark days fell upon the land – this solemn and spiritual event has become perhaps the trashiest modern festival around. The pollution and corruption of this feast by both Christianity and Commercialism is breathtaking in its scope.

Whereas other pagan feasts were adopted and adapted, Oestara becoming Easter, Yule evolving into Christmas, “Halloween” not only hi-jacks the deepest held beliefs and practices of our Pagan ancestors, but manages to insult the very culture it has purloined. Not content with parodying elements of ancient ritual such as the Dead Feast, or divination, (monkey nuts and throwing an apple-peel over one’s shoulder in modern parlance), mainstream churches have ensured many people think the origins of Halloween lie in a form of devil worship. A little annoying for a culture that didn’t believe in a Devil, but certainly telling us more about Christianity and other orthodoxies than about our pagan past!

Samhain: Now is the time of summer’s end the harvest is in, the livestock have been brought down to the lower pastures and if the gods/goddesses have been kind to you then your larder is full. It is also the feast of the Dead in the Celtic Calendar. On this night the veils between the worlds are lowered and not only can a dedicated person seek advice from the Other-worlds but the dead ancestors can reach out to the living.

There is more than one Otherworld. There is what other cultures might call the Faerie World, the magical lands of the Tuath de Danaan who became known as the people of the Sidhe, they who live in the Hollow Hills. There is the Otherworld proper, where we go when we die. Part of our spirit remains there, a trace of us, while the more integrated self is reborn. When we pray to the ancestors we access the sum of all the wisdom learned by all the people through all the long years. There is the Homeland where dwell the Gods and Goddesses: where we can access the Archetypes (such as the Warrior, or the Chief or the Bard.) All these worlds are open to you at Samhain, provided you seek them with a gentle heart and with a respectful purpose.

People generally celebrate Samhain on the 31st of October and this means that you can have a big party to celebrate it and invite all your “normal” friends! For once you probably won’t be the strangest person there. There is also the tradition that has become widely known as Old Samhain: this is celebrated mainly on the 8th of November, although (rarely) it is also celebrated on the 7th here. This is closer to the original date of Samhain in the pre-Gregorian calendar, and almost all Traditional druids and witches in Celtic areas mark this day in some way or another.

Samhain marks several things. As with all Celtic pagan feasts it marks a point on the wheel of the year, in this case the end of the year, and beginning of the New Year. This date, obviously, was a great occasion in Celtic society. Samhain was the period of the year when the livestock which would not make it through the winter was marked out and slaughtered, to be feasted on and to be dried out as provision for the long dark months ahead. This, coupled with the sense of the world going underground for the winter, led to this feast being a feast uniquely concerned with death and the spirit world. At this time, the veils between the world of living and dead were felt to be very flimsy and our ancestors instinctively realized that the spirits, and ancestors, were close at hand.

Because Celtic culture was not secular in the sense that modern society is secular, they had no problem mingling the mundane and profane with the sacred and spiritual: it is difficult to imagine today a world so unselfconscious about its philosophy of life and death, so natural in its approach, that alongside the great feasts of New Year, were held the ritual feasts of the Dead. This dumb feast or dead feast is a very important part of celebrating Samhain: it is part invitation to the universe and to the Ancestors to commune and advise, part soul journey, part act of remembrance and part act of acceptance.

The Celtic belief in an otherworld was very complex and very strong. As you died in this world you were reborn in that world. Death here was celebrated for the birth in the Otherworld and birth here was marked with mourning for the death in the Otherworld. There was a constant exchange of souls between the two. With such a belief you can see how a celebration of death at the moment of the New Year is very appropriate and how there was not the fear and morbidity associated with death that has become so much a part of modern life and which as much as anything contributes to the misunderstanding and misinterpretation by the Christian community of the sacred rite of death in pagan life, known as Samhain and subsequently as Halloween.

We shall light a candle that we will place in our window to guide our ancestors home. There will be a spare place set at the table and we shall read the cards to see what the New Year may bring. We will of course celebrate Halloween for the craic (we are after all Irish). We will enjoy the night for what it is but we will have our ritual on the 7th-November. Whichever you choose or like us both if you wish I would like to say:

Blessings of Samhain to one and all. Beannachtaí na Samhna ar gach duine.
Posted by SilentOwl at 9:29 AM