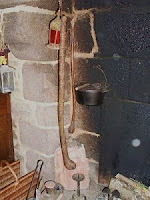 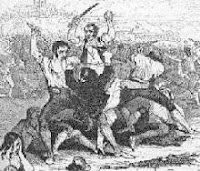 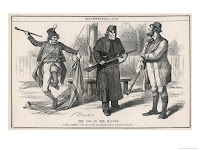 Bataireacht. Our native Irish martial art. Since a cane or walking stick can be carried easily in modern society bataireacht can be used as an extremely effective weapon. Bataireacht or Irish stick fighting as it is also known (from the Irish Bata, meaning stick) is a traditional form of Irish martial art using a stick. The most common types of wood used were oak, ash, hazel and of course blackthorn. Down through the centuries we have used various sticks or cudgels and the one that most people would be aware of is the shillelagh.

Irish stick fighting came into its own sometime around the 17th century when we were banned from owning formal weapons. At that time the innocent walking stick called a bata or shillelagh came into use as a serious weapon and stick fighting became an integral part of our fighting style. In the 19th century bataireacht became associated with gang or “faction” fighting. Some evidence exists which indicates that prior to the 19th century the term had been used to refer to a form of stick fighting used to train Irish soldiers in broadsword and sabre techniques. Although stick fighting is a free style form of combat there are certain patterns and family styles in existence.

The basic idea behind the use of the bata is to charge, strike and disarm your opponent aiming for the vulnerable points such as joints, shoulders, knees and temple or for areas where nerves could be struck. You can use the bata one handed which was the traditional method, although some will use the bata with both hands using a two handed grip (a little awkward). As with a lot of the various martial arts bataireacht has become tainted by Hollywood in such films as The Gangs of New York and it has been made out to be a brutish form of fighting instead of the very precise and extremely well executed defence system it becomes in the hands of a well trained and disciplined practitioner.

No known textbooks for the use of bataireacht exists but its use has been reconstructed using sources that include introducing various forms from other stick fighting styles such as escrima (a Filipino stick fighting system) and Canne de combat (a French style). There is still a style that has been passed down by the Doyle family by the name whisky stick dance where the stick is held with a two handed grip. Cumann Bata is an organisation teaching a one handed version which they have reconstructed where the hand is approximately a third of the way from the end of the stick and the stick is held just above the head.

The Bata used to be our weapon of choice before the gun arrived, It was cheap and readily available and the walking stick or long staff could be carried anywhere and so was always by your side if you needed to defend yourself. Women could carry it just as well and this would have been quite normal in Irish society. The word Shillelagh was actually coined by an Englishman (or so the story goes). The original stick of that name came from the Shillelagh forest in County Wicklow, where the forest was once famous for its stands of fine oak trees.

Sometimes the knob on the end was hollowed out and filled with molten lead, which was known as a 'loaded stick'. However, in shillelaghs made of blackthorn, the knob was actually the root, and it would not have been necessary to load it as it could pack a significant wallop. The bark is left on for added strength and a metal end is attached to the bottom. During the curing and drying process, sticks would be buried in a manure pile or smeared with fat and placed in the chimney. The bata was taken up by Irish boys when they became of age, it was seen by some as representing their passage into manhood and they would practice their fighting techniques as a way of demonstrating their right to be a warrior.

Irishmen would take their shillelagh just about everywhere they went; however, it was at a fair, a wake or a feast day celebration that it was most needed. Up until the great famine of the 1840's, faction fighting was always present at most social gatherings. The factions were mostly members of certain families, political groups or territorial gangs. Sometimes the fights would consist of hundreds of men; women would participate by wielding a stocking filled with stones. After the 1840's, the faction fights gradually died off and the last recorded one was held at a fair in Co. Tipperary in 1887.

Shillelagh fights were not always of the faction variety. Some were sporting events, while others were provoked just for fun. These were friendly fights sometimes ending up somewhat rough, although it was rare for a participant to need the aid of a doctor.

If you have a shillelagh made of oak, ash, holly or blackthorn, you do indeed have an authentic shillelagh. The short, stubby ones sold in souvenir shops are not real shillelaghs.
Posted by SilentOwl at 1:36 PM