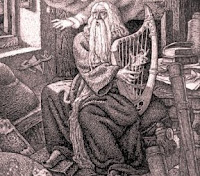 "Amhairghin". It means "Birth of Song".

There are many songs in Ireland some of which are considered sacred but none more so than The Song of Amergin. The first song of the island of mist and mystery. The isle of Ireland.

It is told that years after the Tuatha Dé Danann had settled in Ireland a new group of invaders came. They were called the Milesians and they were the first gaelic people to arrive here. There was amongst them one known as Amergin (Amhairghin. It means "Birth of Song"), he was a dreamer. Known also as the wisdom one he was a bard, a druid and a man of the forest and of knowledge.

The stories tell us that as the invasion was taking place the Dagda invoked his powers in order to repel the strangers. He sunk their ships and called on the winds to turn back their sails. So within the mists of the sea Amergin invoked the elements and the battle for Ireland began. The magic of the druids was strongest in its most powerful form, the form of a song. The sound of the song invokes the forest, the sea, the sky, the mighty and unbeatable forces of nature. The words of wisdom, of power gave victory to the Milesians and the Tuatha were defeated. So begins the era of man. It is said that from that day on all invocations should begin with “I am” for every man is the sacred connection between the spirits, the ancestors, the land and the one.

When the war ended the Tuatha and the Milesians made their peace. It was agreed that most of the Tuatha would leave and go to the land of Tír na nOg, the land of eternal youth. It is also known as the otherworld and only the wisest, purest and bravest of men would have access to it. From the land of Tír na nOg the Tuatha have the power to watch over and to take care of their former land and here Manannán Mac Lir rules. It is said that if ever the people of Ireland need their help then they will return to bring back truth and honour. It is they who rule our land, our seas, our sky. They are the ancestors, the spirits of the realms.

There are different versions of The Song of Amergin. This is but one of them.

I am the wind on the sea
I am the stormy wave
I am the sound of the ocean
I am the bull with seven horns
I am the hawk on the cliff face
I am the sun's tear
I am the beautiful flower
I am the boar on the rampage
I am the salmon in the pool
I am the lake on the plain
I am the defiant word
I am the spear charging into battle
I am the god who put fire in your head
Who made the trails through stone mountains
Who knows the age of the moon
Who knows where the setting sun rests
Who took the cattle from the house of the warcrow
Who pleases the warcrow's cattle
What bull, what god created the mountain skyline
The cutting word, the cold word.