The Pig. The Gentleman Who Pays the Rent. 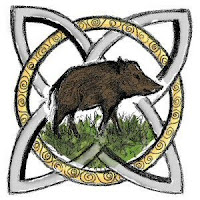 The Pig. The Gentleman Who Pays the Rent.

The pig was always highly prized for its tasty meat and in Irish legend it was the favourite meat of the Gods and heroes at their feasts in the otherworld. It was also greatly respected for its bravery and fierce spirit when defending itself and for this reason was one of the symbols of the warrior.

In Irish Folklore the pig is seen as a lucky animal and they were also able to see the wind and forecast the weather, they were also said to have magical hearing and they could actually hear the grass growing.

Evil or threatening spirits were often said to appear in the form of a black pig and it was believed that this was the worst of all forms for fairy folk to take so people would carry a hazel stick to ward of the evil spirits. This time of year (Halloween/Samhain) when the barriers between this world and the next are weakest is a favourite time for the Black Pig to be abroad so you would be wise not to travel alone at this time.

The pig occurs in Irish folk cures. A cure for a child with mumps was to take it to a pigsty and rub it's head on the pigs back in the hope that the illness would transfer into the pig. It was also believed that a cure for a toothache was for the sufferer to put their head to the ground where a pig had been scratching its backside while making the sign of the cross with their mouth. If you did this you would never suffer from toothache again. Another disgusting cure for jaundice involved swallowing a dozen live lice from a pig.

The Gentleman Who Pays the Rent.

This is the euphemism that was once used in Ireland to describe what was often a family's most valuable possession - the pig.

Until the advent of the industrial age, most people lived a relatively agricultural life. In Ireland before the potato famine, cottagers who may not have been able to afford a riding horse or beef cattle would at the very least keep a few pigs. They were usually housed close to the main dwelling, and sometimes the pig house was attached to one end of the cottage.

Now you might be surprised to see this sort of housing arrangement but the pig was a very valuable part of the Irish cottage economy and pigs do best in warm, dry surroundings. So not only did this practice help keep the pigs (and often a milk cow and laying hens) warm and safe from predators, it was easier feeding kitchen scraps to the pig and hens and collecting manure which was both valuable and very necessary for growing healthy crops. Manure was in fact so valuable you stacked it outside the front of the cottage so you could keep your eye on it.

Pigs were butchered in the autumn , around Samhain. This meant that the animals wouldn’t need scarce fodder over the winter (stocking up enough hay was tedious and land-intensive for a small-holder). It also meant that the cooler weather would slow down spoilage until the salted meat could cure. Cottagers would preserve enough ham, bacon, sausage & lard to see them through the year, and sell the rest to the butcher. However, in poorer households, people did not eat their pig. They sold it to get money to pay the rent on their land. That is why the family's pig was often called "the gentleman who pays the rent."

“The “pig in the parlour” stereotype of Ireland came from the system landlords imposed more than three centuries ago of charging people extra rent for pig houses. The poor country people found that as a pig is a clean and intelligent animal, it could share a clay cabin without soiling it if allowed to come and go. Until recent times there was a tradition in rural Ireland of keeping one pig in the yard to eat the scraps and provide an extra source of food. The practice came to be associated with poverty and died out with the coming of supermarkets.”
Posted by SilentOwl at 12:13 PM