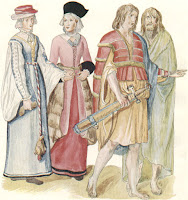 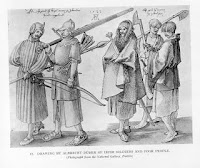 Clothes in medieval Ireland consisted of two main items. Mentioned in the early records up until the 16th century these were the leine and the brat. Most Irish clothes of the time were very brightly coloured, often striped or dotted in various patterns. Brehon’s law (the set of laws that governed ancient Ireland) dictated which specific colours a person’s clothes could be:

“The sons of the inferior classes of chieftains shall wear black, yellow, or gray clothing"

Material for garments varied with social class. The lower classes, which made up the majority of the population, wore clothing made of wool or linen. Since silk and satin had to be imported, only the very rich could afford garments made from such materials.

Leine.
The first was the leine (pronounced lay’/nuh; plural leinte). This was a smock like garment, either sleeveless or with fitted sleeves that fell to just above the ankles. For women, the garment could be even longer, although a full-length leine was never worn with out a brat (see below). Among lower classes, leinte were often shorter, presumably to allow for manual labour. The arms, chest and neck also had a looser fit to allow workers to slip the garment down to their waists during the day’s heat. Designs were embroidered on the neckline, cuffs and hemline. The leine was often pulled up through a belt, making the top billow and the length shorter.

Brat.
The second item found in medieval Irish garb is the brat (pronounce braht). This was a rectangular cloak, most often made from wool. It was worn much like a shawl, with a pin to fasten it at the neck or right shoulder. It was a voluminous garment that could be repositioned to create a hood. Brats were dyed many bright colours. Often the brat was one colour with a fringe or border of another colour. As with the leine, a longer length indicated a higher social status.

Inar.
Another garment sometimes found is the inar. This was a close fitting jacket that came to the waist. It was made both with sleeves and without. The inar was worn with trews (close fitting trousers) and never a leine. Soldiers are most often depicted in these garments.

Broc.
The trews worn with the inar were brocs. These were tight fitting trousers. They came to at least the knee, but could often be longer. When they were longer, they also had a strap that fitted around the bottom of the foot, making them look similar to modern stirrup pants.

Crios.
The crios is a belt, either woven from wool or made out of leather.If woven then several colours are used but usually there is a white border. While weaving, the warp is held taut between a foot and the weaver's hands; no loom is used. They are made 3 1/2 yards long for men, 2 yards for women In addition to holding up a leine, the crios was used to carry things as was often the way in medieval cultures. In contemporary times the crios (pronounced Kris) was worn by fishermen on the Arran Islands off the west coast of Ireland.

Brog.
Brog was a general term for shoes. Most brogs were made of untanned hide, making them soft and pliable. They were stitched together with the same hide and there was no lift or insole. There were also more ornate shoes made of tanned hide that had heels but these were most likely for special occasions.

Kilts.
There is still some speculation as to whether or not the ancient Irish wore kilts. Some historians believe that they did in fact wear kilts. Other believe what is actually depicted is a leine pulled up through the belt, giving the appearance of a kilt, the feileadh mor.
Posted by SilentOwl at 1:15 PM