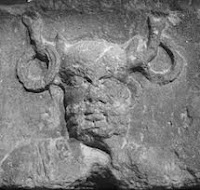 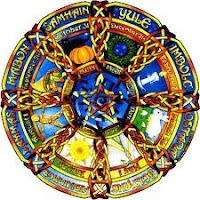 Mug Ruith or Mogh Roith, "slave of the wheel" is a figure in Irish mythology, a powerful blind druid of Munster who lived on Valentia Island, County Kerry. He could grow to enormous size, and his breath caused storms and turned men to stone. He wore a hornless bull-hide and a bird mask, and flew in a machine called the Roath Rámach, the "oared wheel". He had an ox-driven chariot in which night was as bright as day, a star-speckled black shield with a silver rim, and a stone which could turn into a poisonous eel when thrown in water.

He is described as either one-eyed or blind in the tales and he can dry up the lakes with his breath or raise storms. The mediaeval legend tells how one of his eyes was lost in the Alps becoming a 'snow-calf' or mound; the other eye was destroyed while trying to stop the course of the sun for two days. He was hated and feared by the new Christians and he in turn despised them and was a staunch supporter of the pagan faith.

Stories about Mug Ruith are set in various periods of Irish history. Some say he lived during the reign of 3rd century High King Cormac mac Airt, while others put him in Jerusalem during the time of Christ. In Lebor Gabála Érenn he is said to have died in the reign of Conmael, nearly two thousand years before Cormac's time. Perhaps due to this array of times and settings, poets attributed the druid with extraordinary longevity he lived through the reign of nineteen kings according to one story. His powers and long lifespan have led some to conclude he was a sun or storm god.

In at least two poems Mug Ruith is identified as the executioner who beheaded John the Baptist, bringing a curse to the Irish people. He cuts an equally impressive figure in The Siege of Knocklong, set in Cormac Mac Airt's time. Here he defeats Cormac's druids in an elaborate magical battle in exchange for land from King Fiachu Muillethan of southern Munster, from whom Cormac had been trying to levy taxes. Mug Ruith's daughter was Tlachtga, a powerful druidess, who gave her name to a hill in County Meath (Hill of Ward) and a festival celebrated there (Fire at Samhain).

The various medieval legends about his adventures in the Jerusalem at the dawn of Christendom paint him as an interesting and mysterious character. He is said to have been a student of Simon Magus. It is said that Mug Ruith had learned all he could from the greatest magicians in Ireland and Scotland so with his daughter Tlachgta they travelled the east looking for knowledge and learning form all the great masters of magic and it was through this that he met Simon Magus who taught him his magic skills and helped him build the flying machine Roath Rámach.

Tlachgta, Mogh Ruith and Simon Magnus constructed a fabulous flying wheel named Roath Rámach, a machine they used for sailing through the air, a demonstration that their power was greater than that of the apostles. Tlachgta brought the flying wheel with her to Ireland and it was said to be made from two pillars of stone. She made the Rolling Wheel for Trian, the Stone in Forcathu and the Pillar in Cnamchaill (Cnamchaill means bone damage). These devices were dreaded by all and stories were told for generations that anyone who touched them died, any who saw them were blinded, and any who heard them were deafened. Some speculate that these stones were lightening rods and the fear associated with them was a result of the bolts of lightning fired down upon them.

One story say’s that the territory Mug Ruith received for his descendants was Fir Maige Féne, later known as Fermoy. The medieval tribe of Fir Maige Féne claimed descent from him, although they were ruled by the unrelated O’Keefe’s of Eóganacht Glendamnach.
Posted by SilentOwl at 11:54 AM