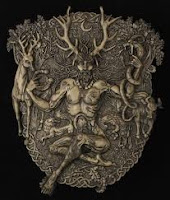 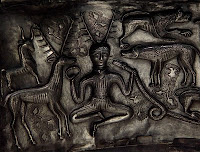 Cernunnos. Known to the Druids as Hu Gadarn. God of the underworld and astral planes.

"The Horned One" is a Celtic god of fertility, life, animals, wealth, and the underworld. Cernunnos is depicted with the antlers of a stag, he sometimes carries a purse filled with coin. The Horned God is born at the winter solstice, marries the goddess at Beltane, and dies at the summer solstice. He alternates with the goddess of the moon in ruling over life and death, continuing the cycle of death, rebirth and reincarnation. Paleolithic cave paintings found in France that depict a stag standing upright on hind legs with the upper body of a man, or a man dressed in stag costume. He seems to be celebrating a hunt and wooing a woman.

To the Celts, Cernunnos the Horned God was more than just a fertile being. He is found throughout the Celtic lands and folklore as the guardian of the portal leading to the Otherworld. His symbols are antlers, the torc (female symbol) and a ram headed snake (male symbol). While many today think of Cernunnos as THE Horned God that may in fact be a misnomer, as it is doubtful that long ago there was ever a group of people who referred to him by this specific name.

To most Neopagans Cernunnos is the God who stands at the gateway of life and death and alternates with the Goddess in ruling over life and death. Seen as the God of fertility, life, animal’s wealth and the Underworld he is continually born, and dies returning year after year.

He would in later years be turned, in part, into the Christian Satan (the devil), a character who at no point in the bible is ever described as having horns.

Cernunnos is a member of the Tuatha de Danaan, his exact location in the family tree of the Celtic gods, however, is a matter of debate.

Cernunnos was worshipped as a forest deity, but he was also a psychopompus (a guider of souls/spirits) who escorted the dead to the afterlife. Cernunnos was of such importance to the Celts that they tried to establish him as a national god rather than a local one and regulate the fragmented Celtic deities into a true pantheon. The Romans occupying Britain placed his image on coins.

He is depicted on the Gundestrup Cauldron, one of the most celebrated works of early Celtic religious art which was uncovered in a peat bog near the village of Gundestrup, Denmark in 1880, and is now housed in in the museum at Århus. Made of 96 per cent pure silver and originally gilded, the vessel stands 14 in. high, is 25.5 in. in diameter, will hold 28.5 gallons, and weighs nearly 20 pound the cauldron comprises thirteen parts: a plain base plate, and five inner and seven outer plates decorated with mythological scenes.

While the origin and date of the cauldron are still unsettled, commentators generally agree that it was carried, possibly by Teutonic looters, to Gundestrup from a distant place. It may have been transported from Gaul, but stylistic details on the vessel suggest it may have been manufactured as far away as the Balkans, in Thrace or what is now Romania. Many elements depicted, such as torcs, snakes with ram heads, or the boar-headed war trumpet known as the carnyx, are certainly Celtic; other details and motifs are so exotic as not to seem European.

The plates depict gods, conventionally seen as larger than humans, ordinary mortals, and animals. The seated horned god is now commonly accepted as an illustration of Cernunnos. A tall divine figure holding a man over a vat of water is thought to be Teutates accepting human sacrifice.

A female divinity flanked by wheels, as if riding in a cart, has been compared with the Irish Medb. The mortals include a troop of infantry in close-knit short trousers and a company of cavalry with a sacred tree. Three sword-bearing warriors are about to execute three huge bulls.

Although much studied and, more recently, photographed and reproduced, the Gundestrup Cauldron remains enigmatic to many commentators. The most controversial of them, Garrett S. Olmsted, has asserted that the scenes on the plates anticipate the action of the Irish epic Táin Bó Cuailnge [Cattle Raid of Cooley].

Information about the Gundestrup Cauldron courtesy of: