Field trip to the bog. 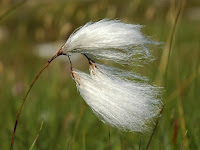 Field trip to the bog

On October 6th we went on a field trip to a bog in Ballintubber County Mayo with the college.

Here are a few of the plants we saw. I’ve included a little folklore with them concerning their use.

Bog Asphodel. Also known as Cruppany grass in County Donegal. Farmers believed that it gave their sheep foot rot or ‘Cruppany’. Also known as Bone-breaker for the same reason.

Bog Myrtle. Considered blessed in Irish folklore, Valued for its many uses which included being used to repel insects, flavour beer and provide yellow dye. It gives off o lovely fragrance when burnt. Leaves off the bush used to be put in linen presses to scent clothes and keep away moths and also into beds to repel fleas. The tops of the branches were used for tanning. The fruits were used in soups and stews to add flavour. Used for medicinal purposes to treat sore throats and kidney trouble. A sprig of Bog Myrtle would be tucked behind the ears or in the hat band to keep the bugs at bay. Herbalists have also been aware of the antibacterial properties of this native herb, known commonly as Sweet Gale. However its uses have been mostly forgotten in recent times. Scientists, who tend to be a little reticent at embracing herbalists' anecdotal evidence, are coming round to supporting Bog Myrtle as the next “big thing” in the pharmaceutical industry for use in skin creams for the treatment of acne. It is reputed to enhance healing through its antiseptic properties.

Sun Dew. Gives off sticky dew which is secreted by the leaves to trap flies & other insects in order to supply additional nourishment. It was said to be a love charm because of its ability to lure and trap other creatures and was known as the herb of love. In Ireland the leaves were boiled in milk (that of asses preferably) as a cure for whooping cough, asthma and Jaundice. Despite this, farmers suspected Sun Dew (wrongly) of giving their sheep liver rot. In ancient times Sun Dew was used by Celtic tribes for dyeing their hair.

Tormentil. The roots of Tormentil were boiled in milk and the milk then given to calves and children to cure them of colic. The name Tormentil reflects this. In Irish folk medicine a mixture of Tormentil, wine and milk was recommended for heart complaints and the roots were used to cure diarrhoea and colic. In Ireland it was also mixed with St.John’s Wort to produce a sleeping draught. The roots of Tormentil contain a lot of tannin and were used in Ireland for tanning, especially during the eighteenth century when tree bark had become scarce. The roots were also used for producing a red dye while the flowers were used to produce a yellow dye.

Devils Bit Scabious. In Ireland it was believed if cows eat a lot of them their milk will be very creamy and that it grew on land that would give good milk. Its name comes from the legend that the devil was jealous of all the healing qualities of the herb so he bit off the end off its root in spite. It was said to be a cure for the plague, fever, poison, venomous bites, bruises, falls, blood clots, swellings of throat, wind, worms, wounds, scurf, dandruff, pimples and freckles. It was used for coughs and internal inflammation. A decoction made from the root was used as a wash for skin eruptions and to clear the head of scurf, dandruff and sores. This emphasis on skin complaints is the origin of the name ‘Scabious’.

Knapweed. In Ireland a decoction of its roots was used in folk medicine as a cure for jaundice and liver trouble and as a tonic for cleansing the system.

Deer’s Grass. The berries when boiled yield a black dye which is suitable for dyeing cloth.

Royal Fern. In Ireland the rhizomes were used in folk medicine as a cure for sprains, dislocations and bruises by boiling them down in water and bathing the effected part with the liquid. It was also used as a cure for rickets, rheumatism and sciatica.

It just goes to show Bogs CAN be interesting places.
Posted by SilentOwl at 12:16 PM