The Hill of Ward. Tlachtga. 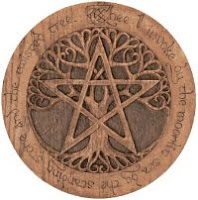 History of the Hill of Ward

Tlachtga the Celtic Goddess of Samhain. Goddess of Thunderbolt's and Wisdom.

While on the one hand, the figure of Tlachtga is one of the many tragic heroines of Irish myth (such as Deirdu or Grainne), her name is also used for a geographical location. This location is the Hill of Ward, near Tara.

There are two references to Tlachtga in Irish literature; the first is the banshenchas "the Lore of Women" which sought to act as a sort of condensed guide to the various women of Irish myth. The second source is the dindsenchas "the Lore of Places" which sought to explain the names of various locations in Ireland. In each poem, we are told that Tlachtga is the daughter of Mog Roith, a powerful druid of Munster, and is associated with the son or sons of Simon Magus, often tragically.

Tlachtga means "earth spear" from tlacht "earth" and gae "spear." The hill is the site of a great oenach, the gathering, where the druids would light the bruane Samhna, New Year bonfires on Samhain (this was not at Tara). Now called Ward Hill (or Hill of Ward), it lies 12 miles northwest of Tara. Tlachtga was the point where the druids felt that this world and the otherworld were closest at the New Year; this tradition was later blended with that of Tara, which would then be associated with the holy centre of Ireland. The hill had consisted of a raised enclosure surrounded by four banks and ditches, a series of rings; these were disturbed in 1641(around Cromwell’s time).

Tlachtga is a sun goddess, one of several in Irish mythology (another being Grainne wife of Finn mac Cumhail). The name Mog Roith apparently means "devote of the wheel," and it is assumed that the wheel in question, as well as the wheel that Tlachtga makes, is the sun. This could then mean that the Samhain fires held on her hill were a way of recapturing the sun's light in the New Year, a way of ensuring light against the growing darkness of winter. The "pillar" is thought to represent lightning, and this would then explain the name "earth spear", for lightning was a spear thrown at the earth. She is then also not only goddess of the sun, but of lightning and storms.

The theme of a goddess, who dies in childbirth, giving her name to the land, is also seen in the story of Macha in the Ulster Cycle. In dying and entering the earth, her power then resides in the land.

Tlachtga was a fertility Goddess whose cult was centred on the hill. A later myth speaks of her being a Witch and daughter of the powerful wizard and chief Druid Mug Ruith.

The old legends of Mug Ruith suggest that he was a Sun God). The legend speaks of Tlachtga and Mug Ruith arriving in Italy and putting themselves under the tuition of a powerful wizard called Simon Magnus. The three constructed a flying wheel called the Roth Rámach. They used this machine to sail through the air and demonstrate how great their powers were. Mug Ruith and his daughter soon return to Ireland and brought the flying wheel with them.

We are then told that Simon’s 3 sons rape Tlachtga on the Hill and she died there giving birth to 3 sons. The great earthworks seen on the hill were raised over her grave and a festival was held in her honour. The number 3 is a very significant number for the Celts, suggesting that it represents the past, present and future. Or, it represents the world of the living, the in-between world/ underworld and the spirit world. The number 3 clearly has a female perspective because in many cases the Goddesses are described has having 3 aspects.

The myth of Tlachtga being raped by Simon’s 3 sons is a newer one (a Christian invention).

It has been suggested that the rape and death of the Goddess may represent the suppression of her cult with the taking over of another tribe, suggesting that Mug Ruith’s cult belonged to the invading tribe.

The Hill of Ward, also known as Tlachtga has been overshadowed by its famous neighbour Tara, and has not received the attention it deserves as a place of importance. This was the centre of the Great Fire Festival that signalled the onset of winter. The rituals and ceremonies carried out here by the pre-Christian Irish, offered assurance to the people that the powers of darkness would be overcome, and the powers of light and life would prevail. This was the place where the Celtic Sun God and Fertility Goddess were celebrated at the year’s end.

The memory of Tlachtga remained strong at the site, however, the arrival of new invaders have changed Tlachtga’s original role. She underwent a process of transformation from Fertility Goddess (and Goddess who protected her tribe), into the consort of the Sun God (Mug Ruith). The ceremonies at this site continue and the Samhain Festival has been reinstated.

There is a pre-existing grave here known as a barrow burial, which was a burial known to have taken place throughout the Bronze Age and continued into the Iron Age. The person who is buried at Tlachtga is undoubtedly an important figure. However, without in-depth archaeological digging, no one is certain what’s underneath. It is most likely a Bronze Age burial of a local Chieftain whose prestige was very high at the time of his death (it has been suggested that he may have been a King).
Posted by SilentOwl at 6:05 AM