Ogma. God of eloquence and learning. 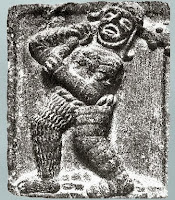 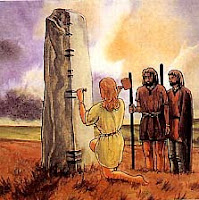 Ogma. God of eloquence and learning.

In Irish-Celtic myth, Ogma is the god of eloquence and learning.

He is the son of the goddess Danu and the god Dagda, and one of the foremost members of the Tuatha Dé Danann. Skilled in dialects and poetry as well as being a warrior. He also had a role in conveying souls to the Otherworld. He was called Ogma Grian-aineach (of the Sunny Countenance) and Ogma Cermait (of the Honeyed Mouth). He is also credited with various children, of which his daughter Etain married the god of medicine, Dian cecht. He ruled from the sldhe of Airceltrai.

He is the reputed inventor of the ancient Ogham alphabet which is used in the earliest Irish writings. Ogham was the first written language of Ireland it is a series of symbols that represent certain words and letters in the Irish vocabulary.

Ogma is found both in the "First Battle of Magh Tuiredh" and in the "Cath Magh Tuiredh" which overlaps part of the first battle. Ogma helps the Tuatha de Danaan retake the island of Eirinn, or Ireland, from the Fir Bolg who are attempting to settle there. Ogma is often considered a deity and may be related to the Gaulish god Ogmios.

People can also find this god in a later part of the mythological cycle about how the island of Ireland was taken. It's said in this later section that the daughters of Ogma, named Eire, Fotla and Banba were promised that the one of them who could predict the future of the Tuatha de Danaan in Ireland would have the land named for her.

Another variant of this says that each of them met with the bard Amergin, who it is thought was a real person and who came to Ireland with the sons of the Mil from the Iberian Peninsula. Amergin, author of the famous poem that reads like a riddle, apparently offered the naming of the isle to each of them and Eire won the honour of having her name be forever remembered as the name for the land.

Another story concerning Ogma tells of how he fought in the first battle of Mag Tuired, when the Tuatha Dé take Ireland from the Fir Bolg. Under the reign of Bres, when the Tuatha Dé are reduced to servitude, Ogma is forced to carry firewood, but nonetheless is the only one of the Tuatha Dé who proves his athletic and martial prowess in contests before the king. When Bres is overthrown and Nuadu restored, Ogma is his champion.

His position is threatened by the arrival of Lugh at the court, so Ogma challenges him by lifting and hurling a great flagstone, which normally required eighty oxen to move it, out of Tara, but Lugh answers the challenge by hurling it back. When Nuadu hands command of the Battle of Mag Tuired to Lugh, Ogma becomes Lugh's champion, and promises to repel the Fomorian king, Indech, and his bodyguard, and to defeat a third of the enemy.

During the battle he finds Orna, the sword of the Fomorian king Tethra, which recounts the deeds done with it when unsheathed. During the battle Ogma and Indech fall in single combat, although there is some confusion in the texts as in Cath Maige Tuired Ogma, Lugh and the Dagda pursue the Fomorians after the battle to recover the harp of Uaitne, the Dagda's harper.

He often appears as a triad with Lugh and the Dagda, who are sometimes collectively known as the trí dée dána or three gods of skill, although that designation is elsewhere applied to other groups of characters.
Posted by SilentOwl at 9:31 AM