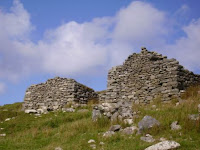 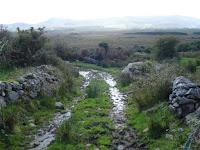 Have you ever been walking down a green grassy bóithrín (Irish-Small road, room for one cow) on a bright sunny day and were suddenly overtaken by a hunger so strong you almost passed out? Believe me, it's happened, a good Irishman would immediately know why and what to do. Hungry Grass. There are those who suggest that it's a spot where a corpse has lain on the way to its final resting place, or even where they still lie covered by grass, memories of the famine.

There are even those who suggest that it may be a fairy curse. Anyone who walks or passes over the hungry grass, or in Irish, "féar gortach" will suddenly become hungry beyond reason, even if they have just been well fed. Those who live near patches of such grass have been known to keep extra food on hand in the case of afflicted travellers knocking on their door. No other side effects are known.

Sometimes you might even hear some of the older folk say "The fear gortach is on me" meaning they are feeling very hungry.

When we were young children we were told to always have a biscuit or a piece of bread in our pockets when going out for a walk just in case the Féar gortach came on us, of course if you ate the biscuit you could always suck on a shoelace.

As an adult when I visit somewhere like the famine village over in Achill I break off a piece of bread, pour a little of what I have to drink and I also break off the tip of my cigarette and place them on the ground as an offering to the spirits of the place.

Years ago when talking to a Choctaw who was visiting Westport on his travels he noticed what I wore round my neck and we got talking, we exchanged stories of various customs including leaving offerings to the spirits and we realised we had more in common than the walk of tears.
Posted by SilentOwl at 12:23 PM