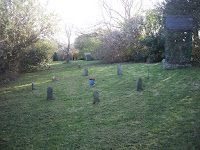 Stone Circles, Stone Rows, and Standing Stones are quite evocative in the Irish landscape and still cause people to pause and contemplate their original use and to imagine the rituals which took place at, or in them and to try to imagine the people who performed such ritual. Were they for marriage, a baptism of some sort, funeral rites, or sacrifice? Nothing else in Irish archaeology has this power of connecting the peoples of the past with the people of the present. To stand in the centre of a Bronze Age stone circle on the side of a windswept hill is an extremely moving experience.

There are two distinct types of stone circle in Ireland. In West Cork - Kerry the circles are made up of uneven numbers of stones from five to seventeen and these contain an area of between 8 feet and fifty feet. The entrance faces the north-east and a stone opposite the entrance is called the axial stone. Some of the circles have a boulder burial within them. Boulder burials are very simple in plan and are just what they describe, a burial, usually cremated, with a large boulder marking the spot.

In Fermanagh, Tyrone and Derry a group of stone circles are classified as the Mid-Ulster Group. There are some differences between this group and the Cork Kerry group. These differences occur in the spacing between the stones, the size of the stones and the number of stones. The area within the Ulster group is usually smaller than that of thier southern counterparts.

The largest stone circle in Ireland is that of Grange at Lough Gur in County Limerick. This is very accessible and an effort should be made to get to it if you have an interest in how our Bronze Age ancestors conducted their daily lives. It measures 150 feet in diameter and is enclosed by 113 standing stones. The stones are surrounded by and supported by a forty foot wide bank The largest stone is over 13 feet high and is estimated to weigh 40 tons. It was built over 4000 years ago.

By 2000 B.C., stone circles were built in Ireland and elsewhere in Europe. A population concerned with birth and fertility, the Irish included movements of the sun in their religious monuments. The circles were temples for a solar religion. In 1159 B.C., there are indications that the weather got much worse and the gods and goddesses of water, in streams and lakes, took on greater importance. Material possessions, animals, and even people were sacrificed, probably to appease these gods.

There is hardly any evidence available to tell us what stone circles were actually used for. Some archaeologists suggest they may have had a ritualistic purpose (this is normal when they don’t have a clue or cannot agree). Some even suggest they may have been royal burial sites and then there are those who suggest sites of sacrifice (seems like an awful lot of trouble when you could just sacrifice using the bogs).

However, as previously mentioned the astrological alignment of the circles cannot be denied. Evidence of cremation have been found in some circles but does this mean sacrifice or could it simply have been someone of high rank who having died was cremated in the circle ?

Archaeologists have suggested that stone circles pre-date the Celts and the druids and therefore were not druidic in their conception. However, although druids celebrated within groves it is quite conceivable that they also used the stone circles for ritual as their understanding of the cosmos was extremely advanced and the positioning of the stones would have been known to them.

It has been said that there is no written evidence concerning the druids, (Julius Caesar) and Christianity saw to that. I would suggest that they were totally biased and inaccurate with an extremely big axe to grind.

There is, however, one legend in Irish literature that seems to connect the druids with a stone circle, and that is contained in an early Life of St. Patrick.

It concerns an event that took place near the modern Ballymagauran in County Cavan in Ireland. Here stood the chief idol of Ireland, Cromm Cruaich, and this was surrounded by a ring of twelve smaller idols; it is described as the scene of druidic worship, and it witnessed a mighty conflict between St. Patrick and the druids. In the end, Patrick threatened the main idol so effectively that it was permanently branded with the mark of his stave.

This sounds very much as though the legend is an attempt to explain the existence of a stone circle with a central standing stone, and it is clear, therefore, that in the ninth century, the probable date of this Life, such remains were connected with the druids. This is, of course, very far from being proof that the druids really did worship at such places, but it shows that it is not altogether an extravagant notion to suppose so. Today we do use stone circles for ritual. However, we also use open spaces, woods, or by the side of water.
Posted by SilentOwl at 10:05 AM