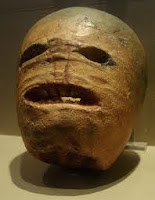 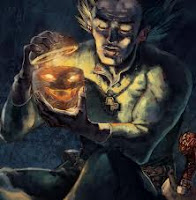 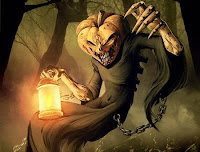 According to Irish folklore, a man named Jack, well known for his drunkenness and quick temper, got very drunk at a local pub on Halloween. As his life began to slip away the Devil appeared to claim Jack's soul. Jack, eager to stay alive, begged the Devil to let him have just one more drink before he died. The Devil agreed. Jack was short of money and asked the Devil if he wouldn't mind assuming the shape of a sixpence so Jack could pay for the drink and after the transaction the Devil could change back.

Seeing how the Devil is quite gullible in almost all of these folk tales, he agreed again to help Jack out and changed himself into a sixpence. Jack immediately grabbed the coin and shoved it into his wallet which just happened to have a cross-shaped catch on it. The Devil, now imprisoned in the wallet screamed with rage and ordered Jack to release him.

Jack agreed to free the Devil from his wallet if the Devil agreed not to bother Jack for a whole year. Again, the Devil agreed to Jack's terms. Realizing he now had a new lease on life, at least for a year, Jack decided to mend his ways. For a time Jack was good to his wife and children and began to attend church and give to charity. Eventually, Jack slipped back into his evil ways.

The next Halloween as Jack was heading home the Devil appeared and demanded that Jack accompany him. Once again Jack, not too eager to die, distracted the devil by pointing to a nearby apple tree. Jack convinced the Devil to get an apple out of the tree and even offered to hoist the Devil up on his shoulders to help him get the apple. The Devil, fooled once again by Jack, climbed into the tree and plucked an apple. Jack took out a knife and carved a cross into the trunk of the tree. Trapped once again the Devil howled to be released and told Jack he would give him ten years of peace in exchange for his release. Jack, on the other hand, insisted the Devil never bother him again. The Devil agreed and was released.

Almost a year later Jack's body, unable to withstand his evil ways, gave out and Jack died. When Jack tried to enter Heaven he was told that because of his meanness he would not be allowed in. When Jack attempted to gain entry into Hell, the Devil, still smarting from years of humiliation, refused Jack admission. However, being the kind Devil that he was, he threw Jack a piece of coal to help him find his way in the dark of limbo. Jack put the piece of coal into a turnip and it became known as a Jack O'Lantern.

On Halloween if you look you can still see Jack's flame burning dimly as he searches for a home. Of course when Irish people went to America they discovered the pumpkin and as it was easier to carve it soon replaced the turnip.