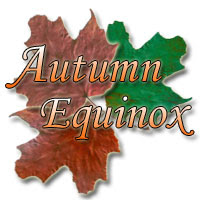 The Autumnal Equinox signals the end of the summer months and the beginning of winter. At this time of year, days have been shortening since the Summer Solstice some three months earlier, and the Equinox is the point where nights reach the same length as days. After this point, the Sun will shine lower and lower on the horizon until the Winter Solstice in about three months' time.

The Autumn Equinox is a time of harvesting and preparation. It is a time to reflect on your life and to start making plans for the future. The main agricultural harvest has been gathered and all that is left are the late fruits, berries and nuts.

As plants wither, their energy goes into the hidden roots and nourishes the Earth. The leaves of trees turn from green to red, brown and gold - symbolic of the sinking Sun as nature prepared for winter. This is the time of balance between the outer and the inner worlds. From now on, we should turn towards nurturing our own roots, pondering our inner lives and planning for the long-term. Thoughts can be seeded, gradually growing in the unconscious until they can emerge in the spring. It is the drawing in of family as we prepare for the winding down of the year at Samhain. It is a time to finish old business as we ready for a period of rest, relaxation, and reflection.

A time of celebration for the bounty of the earth and a time of balance reflecting on the equal length of both day and night. Hospitality is another tradition common for this time of the year as in times past you never knew when your neighbour might have to provide food for your family if your own supplies ran low during the winter months. Weak and old animals and livestock were often slaughtered at this time of year to preserve winter feed stocks.

A lovely place to visit at the time of the Equinox is Loughcrew and here is a short description. If you get the chance go and check it out, you won’t regret it.

Loughcrew (Irish: Loch Craobh) is near Oldcastle, County Meath, Ireland. (Sometimes written Lough Crew). Loughcrew is a site of considerable historical importance in Ireland. It is the site of megalithic burial grounds dating back to approximately 3500 and 3300 BC, situated near the summit of Sliabh Na Caillí. Lough Crew Passage Tomb Cemetery is one of the big four passage tomb sites in Ireland (the others are Bru Na Boinne, Carrowkeel and Carrowmore).

The sites consist of cruciform chambers covered in most instances by a mound. A unique style of megalithic petroglyphs are seen there, including lozenge shapes, leaf shapes as well as circles. The site has three parts; two are on hilltops, Carnbane East and Carnbane West. The other, less well preserved cairn is at Patrickstown. The Irish name for the site is Sliabh Na Caílli, which means mountains of the witch, and legend has it that the monuments were created when a witch flying overhead dropped her cargo of large stones from her apron.

The orthostats and structural stones of the monuments tend to be from local green gritstone, which was soft enough to carve, but which is also vulnerable to vandalism. There is a widespread belief that Cairn T in Carnbane East is directed to receive the beams of the sun at sunrise on the autumn Equinox - with light entering and illuminating the art on the backstone.

It is time to reflect upon the past and to look deep within your soul
Are you content with what you have achieved this year?
Have you worked towards your chosen goal, or goals?
Have you shared laughter, have you shared tears?

It’s the Autumn Equinox, equal day, and equal night,
And the sunset’s a glorious pink
The moon battling the sun, begins to win the fight
It’s getting colder now, as into the west it sinks.

The earth is growing tired and prepares to go to sleep
And winter will rule now the battle is done
But the seed that lies dormant, buried deep
Awaits the spring and the warmth of the rising sun.