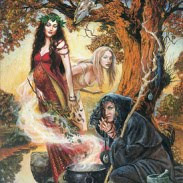 The Morrigan (also known as the Morrigu) was the shape-shifting Celtic Goddess of War, Fate and Death. She also presided over rivers, lakes and fresh water, in addition to being the patroness of revenge, night, magic, prophecy, priestesses and witches.

Her name is interpreted in various forms..."Great Queen," "Phantom Queen" or "Queen of Demons." She was said to hover over battlefields in the form of a raven or hooded crow and frequently foretold or influenced the outcome of the battle. The Morrigan was often depicted as a triune goddess whose other aspects were manifested in the Goddess Badb (meaning "Vulture" or "Venomous") and the Goddess Nemain (meaning "Frenzy" or "Fury").

The Morrigan was one of the Tuatha De Danaan ("People of the Goddess Danu") and she aided in the defeat of the Firbolgs at the First Battle of Magh Tuireadh and the Fomorii at the Second Battle of Mag Tured.

The Celts believed that, as they engaged in warfare, the Morrigan flew shrieking overhead in the form of a raven or carrion crow, summoning a host of slain soldiers to a macabre spectral battle. When the battle had ended, the warriors would leave the field until dawn in order that the Morrigan could claim the trophies of heads, euphemistically known as "the Morrigan's acorn crop."

The origins of the Morrigan appear to be directly linked to the megalithic Cult of the Mothers, who usually appeared as triple goddesses. Her role in Celtic legend is similar to that of the Valkyries in Norse folklore in that both used magic to cast fetters on warriors and made the decision regarding who would live and who would die. The Morrigan is also closely associated with horse symbolism and may, on occasion, have been linked with the equine Goddess, Epona.

Another guise of the Morrigan is that of the "Washer at the Ford," who could usually be found washing the clothes of men about to die in battle. In effect, she is thus choosing those whose lives will be lost in the upcoming conflict.

In one legend concerning the Morrigan, she appears to the hero Cuchulainn (son of the God Lugh) and offers her love to him. When he fails to recognize her and rejects her, the Morrigan is deeply wounded and informs Cuchulainn that she will hinder him while he is in battle. When Cuchulainn finally perishes, she settles on his shoulder in the form of a crow, the hero's misfortune being that he never realized the feminine power of sovereignty that the Morrigan offered to him.

Once Goddess of Strife and Fertility, as well as Battle, modern Pagans view the role of the Morrigan in a somewhat different light from that of the Ancient Celts, but she remains an appropriate deity for strong and independent individuals. Many followers of the Morrigan erect a permanent shrine in her honour, using such items as the feather of a crow or raven, or even a piece of red cloth to symbolize the Washer at the Ford.

In some stories, the Morrigan is depicted as a triple goddess, usually with some combination of her sisters Macha, Nemain, or Badb. The Morrigan may also be depicted alone, and she is a shapeshifter. She can appear as a human woman, but she may also appear in the form of a crow or a cow. Crows are associated with death, since they often hover around battlefields, while cows are associated with fertility and farming. These different forms illustrate the many ways in which the Morrigan is viewed. In most stories, she is a figure to be feared, reflecting ancient beliefs in Ireland about the power of women.

In most stories, the Morrigan is associated with prophecy and fate. It is implied that the Morrigan has the ability to shape or dictate fate, whether at the battlefield or on the farm. Some researchers have suggested that the Morrigan is actually a goddess of sovereignty, which could explain her conflicting roles in mythology, as she must sometimes go to war to protect the sovereignty of her people. Various versions of the Morrigan were also historically used by separatist groups in Ireland as figures to worship and rally around, supporting this interpretation of the goddess.

The Morrigan's name is also a topic of some interest. It may translate as “Great Queen,” but it could also be “Nightmare Queen” or “Phantom Queen,” depending on which diacritical markings are used on her name. “Phantom Queen” appears to be the truest translation of the early forms of her name, suggesting that she was viewed with awe and fear in the earliest stories about her. Other historians suggest that her name really translates as “Mare Queen,” indicating that she is one of the Horse Goddesses of Irish mythology.

This mythological figure plays a prominent role in the Ulster Cycle, influencing the outcome of events and eventually causing the death of the story's hero, Cúchulainn. She also shows up in several collections of myths from later periods, including Cath Maige Tuireadh and Lebor Gabala Erenn, part of the Mythological Cycle, a collection of Pagan myths from Ireland which includes stories, histories, poems, and songs.

Image of death by Victoria Francés. View her work at: www.victoriafrances.
Posted by SilentOwl at 11:50 AM