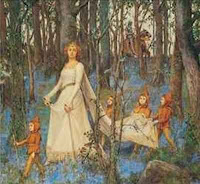 Danu is the oldest Celtic Goddess, known also as Don and Anu. Her influence spread far across the British Isles and Europe. Few stories about Danu have survived, and yet the reverence in which she is held still remains. Danu is the power that is in the land, never to be overcome by mortals. Her power is in the imagination of those who see magic in the twilight mist between the worlds.

Danu is the mother of the Irish gods, linked to the goddess Dôn in Wales. Her tribe is the Tuatha Dé Danann, the People of the Goddess Danu or Ana. Invading Ireland on the first of May, the Tuatha Dé Danann battled the Fir Bolg, and eventually won an uneasy peace. In their turn the Tuatha Dé Danann were displaced by the mortal Milesians, and retreated to the sídhe, or hollow hills, to become the Faery Folk of legend. Danu is a goddess of fertility and plenty, and there is evidence that the river Danube is named for her. As mother of the faeries she is close to the land and waters.

In Ireland’s County Kerry we have place names such as The Paps of Anu.

The Paps are named after Anu, prinicipal Goddess of pre-Christian Ireland and mother Goddess of the Tuatha De Danann. The Goddess Anu brought prosperity to Munster. Anu or Danu who appear to be one in the same divinity, was originally a European Goddess, her name being commerorated most famously in the River Danube.

Anu is also identified with the Mor Riogach, a war fury or Goddess whose name means great queen, together with Badbh and Macha, she was one of the triad of War Goddesses known as the Morrigna, manifesting themselves as ravens. Immediately to the North East of the higher Pap is an area called Gleannfreagham "The Glen of the Crows" and a small lake of the same name.

Such names in proximity with the mountains called after Anu shows how mythology lives on in place names. Ravens still inhabit this Glen and in suitable weather conditions can be seen gliding on the thermals above the cairns on the summits of the Paps.The Paps' cairns appear to be part of a deliberately placed series which overlook the plains of the southwest.

The cairn on the eastern peak is a substantial monument, measuring a height of 4 metres and a diameter of 18m-20metres. The entrances of both cairns are aligned westwards, towards the setting sun. It is thought that the cairns contain Neolithic burial chambers. They are the subject of ongoing study and excavations to confirm such theories.
Posted by SilentOwl at 12:22 PM