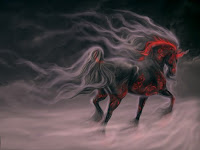 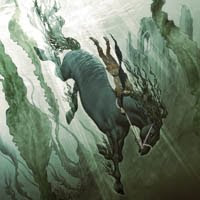 The kelpie like the Aughisky is a supernatural water horse from Celtic folklore that is believed to haunt the rivers and Loughs of Scotland and Ireland. The horse's appearance is strong, powerful, and breathtaking. Its hide was supposed to be black (though in some stories it was white), and will appear to be a lost pony, but can be identified by its constantly dripping mane. Its skin is like that of a seal, smooth but is as cold as death when touched. Water horses are known to transform into beautiful women to lure men into their traps. It is understood that the nostril of the horse is what creates the illusion of grandeur. The water horse creates illusions to keep itself hidden, keeping only its eye above water to scout the surface, much like the illusion of a fish's pupil. It is wise to keep away from them.

As the story of the kelpie differs depending on the region where it is told. Other versions of the story say that the kelpie is "green as glass with a black mane and tail that curves over its back like a wheel" or that, even in human form, they are always dripping wet and/or have water weeds in their hair.

The water horse is a common form of the kelpie, said to lure humans, especially children, into the water to drown and eat them. It performs this act by encouraging children to ride on its back. Once its victims fall into its trap, the kelpie's skin becomes adhesive and it bears them into the river, dragging them to the bottom of the water and devouring them — except the heart or liver. Commonly known as spirits of the dead, they are malevolent creatures.

An exception is an Irish tale in which, toward the end of the mystical period of Ireland, a water horse fails to travel to Tír na nÓg with its fellow mystic folk and instead rises above water, seeking a wife. However, after attempting to court a clever girl, who consults a druid about the situation, he is captured and forced to work to be taught compassion. After learning his lesson, he is given the choice of departing to Tír na nÓg or drinking a magic potion that will make him a real man. The water horse, now full of love, decides to drink the potion which erases the memories of his life as a water horse and gives him the chance to live with the clever girl with whom he has fallen in love.

Some say the kelpie is not always male, but may also take the form of a human woman. In this instance, the kelpie is often referred to as a water wraith and is most often seen clothed in a green dress. She is just as treacherous as a male Kelpie.

There was one way in which a Kelpie could be defeated and tamed; the Kelpie's power of shape shifting was said to reside in its bridle, and anybody who could possess such a bridle could force the Kelpie to submit to their will. A Kelpie in subjugation was highly prized, it had the strength of at least 10 horses and the endurance of many more, but the fairy races were always dangerous captives especially those as malignant as the Kelpie.

There once was a Kelpie's wife, who lived beneath the Lough with her baby son, whom she loved dearly. The Kelpie's wife loved her husband but she missed the warmth of the sun and her family, for the Kelpie had stolen (this is the custom of Kelpies who steal their wives) her away from them without as much as a farewell.

One day, when her husband was out hunting victims, the cold and the darkness became unbearable and she fled to the surface, leaving behind her baby son, for she knew the Kelpie loved his son and would care for him. Once at the surface she basked in the warmth of the sun and soon made her way to her parent’s cottage. Her family were overjoyed to see her, for they thought she had died and so they held a great Celidh.

The Celidh dragged on into the night and the Kelpie's wife soon forgot her husband and child with the joy of being reunited with her family. During the night there came a great storm and suddenly, from outside the cottage, they could hear the champing of a horse's hooves.

Her husband had found his wife gone and was furious, for he loved her so greatly that he viewed her escape as the ultimate crime. Taking the form of a black stallion he banged on the cottage door but he could not enter, for he had not been given permission to enter and cross the threshold. He called for her in rage filled screams. The Kelpie's wife was frightened and also sad for she loved her husband but wished to stay with her family. Eventually, during the night, they heard a great 'thud' as something hit the door. After this, there was silence.

In the morning when the Kelpie had returned to the Lough, they found lying on the ground, the decapitated head of the Kelpie's son. In revenge for his wife's betrayal he had slain his only son. This was the price to pay for breaking a Kelpie's heart. The Kelpie's wife lived contently and was never again bothered by the Kelpie, who had learnt his lesson of love.
Posted by SilentOwl at 1:11 PM