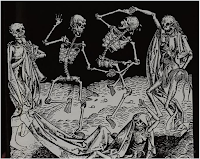 There are many Irish Superstitions. We Irish have always been a superstitious lot. These superstitions give the Irish a certain charm that no other people seem to have. However, what is a superstition? A superstition is anything that people believe that is based on myth, magic, or irrational thoughts. They are beliefs that are steeped in lore or tradition, and it is usually difficult to pinpoint the exact origin. Superstitions are also known as old wives' tales, legends, and traditions. Superstition is an integral part of almost every culture around the world.

Even people who do not believe in superstition may still pause before walking under a ladder, or may think of a wish when they see a falling star. People have good luck charms, such as a rabbit's foot or a lucky piece of jewellery. Superstitions, whether believed by a whole culture or just one person, still have some sway over people's lives, with or without having any actual power.

Here are some of the superstitions surrounding a death.

When someone dies you should close the curtains because should a moonbeam shine through the window onto the corpse or coffin then the devil sends his demons down it to steal the soul.

Stop all clocks at the time of death to confuse the devil and give the soul time to reach heaven.

In Ireland the dead are carried out of the house feet first, in order to prevent the spirit from looking back into the house and beckoning another member of the family to follow him.

Family photographs were also sometimes turned face-down to prevent any of the close relatives and friends of the deceased from being possessed by the spirit of the dead.

Cover all mirrors at the time of a death in the house or the soul will be trapped within the mirror.

Magpies are the messengers of doom. If a magpie comes to a person’s door and looks at you, then you are doomed. This is the worst kind of omen and nothing can be done to avert the misfortune about to befall you.

Another superstition is that if a swarm of bees decide to desert a hive all of a sudden, a death is going to occur in the house.

If the deceased has lived a good life, flowers would bloom on his grave; but if he has been evil, only weeds would grow.

Never wear anything new to a funeral, especially shoes.

If you smell roses when none are around someone is going to die.

If you see yourself in a dream, your death will follow.

If you see an owl in the daytime, there will be a death.

If you dream about a birth, someone you know will die.

If it rains in an open grave then someone in the family will die within the year.

If a bird pecks on your window or crashes into one that there has been a death.

If a picture falls off the wall, there will be a death of someone you know.

If you spill salt, throw a pinch of the spilt salt over your shoulder to prevent death.

Never speak ill of the dead because they will come back to haunt you or you will suffer misfortune.

Two deaths in the family means that a third is sure to follow.

The cry of a curlew or the hoot of an owl foretells a death.

A single snowdrop growing in the garden foretells a death.

Having only red and white flowers together in a vase (especially in hospital) means a death will soon follow.

Dropping an umbrella on the floor or opening one in the house means that there will be a death in the house.

A dog howling at night when someone in the house is sick is a bad omen. It can be reversed by reaching under the bed and turning over a shoe.

Sparrows carry the souls of the dead, it is considered unlucky to kill one.

You must hold your breath while going past a cemetery or you will breathe in the spirit of someone who has recently died.

If a woman is buried in black, she will return to haunt the family.

If a dead person's eyes are left open, he'll find someone to take with him.

Mirrors in a house with a corpse should be covered or the person who sees himself will die next.

Ivy growing on a headstone stops the soul from resting.

If any one takes ill at Whitsuntide there is great danger of death, for the evil spirits are on the watch to carry off victims, and no sick person should be left alone at this time, nor in the dark. Light is a great safeguard, as well as fire, against malevolent influences.

The souls of the dead who may happen to die abroad, greatly desire to rest in Ireland. The relations consider it their duty to bring back the body to be laid in Irish earth. However, even then the dead will not rest peaceably unless laid with their forefathers and their own people, and not amongst strangers.

A young girl happened to die of a fever while away on a visit to some friends, and her father thought it safer not to bring her home, but to have her buried in the nearest churchyard. However, a few nights after his return home, he was awakened by a mournful wail at the window, and a voice cried, "I am alone; I am alone; I am alone!" Then the poor father knew well what it meant, and he prayed in the name of God that the spirit of his dead child might rest in peace until the morning. And when the day broke he arose and set off to the strange burial ground, and there he drew the coffin from, the earth, and had it carried all the way back from Cork to Mayo; and after he had laid time dead in the old graveyard beside his people and his kindred, the spirit of his child had rest, and the mournful cry was never heard again.

Many strange spells are affected by the means of a dead man's hand, chiefly to produce butter in the churn. The milk is stirred round nine times with the dead hand, the operator crying aloud all the time, "Gather! gather! gather." While a secret form of words is used which none but the initiated know.

Another use is to facilitate robberies. If a candle is placed in a dead hand, neither wind nor water can extinguish it. If carried into a house the inmates will sleep the sleep of the dead as long as it remains under the roof, and no power on earth can wake them while the dead hand holds the candle.

For a mystic charm, one of the strongest known is the hand of an unbaptised infant fresh taken from the grave in the name of the Evil One.

A dead hand is a certain cure for most diseases, and many a time sick people have been brought to a house where a corpse lay that the hand of the dead might be laid on them.

The corner of a sheet that has wrapped a corpse is 'a cure for headache if tied round the head.

The ends of candles used at wakes are of great efficacy in curing burns.

A piece of linen wrap taken from a corpse will cure the swelling of a limb if tied round the part affected.

It is believed that the spirit of the dead last buried has to watch in the churchyard until another corpse is laid there; or has to perform menial offices in the spirit world, such as carrying wood and water until the next spirit comes from earth. They are also sent on messages to earth, chiefly to announce the coming death of some relative, and at this they are glad, for then their time of peace and rest will come at last.

If anyone stumbles at a grave it is a bad omen; but if he falls and touches the clay, he will assuredly die before the year is out.

Any one meeting a funeral must turn back and walk at least four steps with the mourners.

If the nearest relative touches the hand of a corpse it will utter a wild cry if not quite dead.

On Twelfth Night the dead walk, and on every tile of the house a soul is sitting, waiting for your prayers to take it out of purgatory.

There are many strange superstitions in the western islands of Connemara. At night the dead can be heard laughing with the fairies and spinning the flax. One girl declared that she distinctly heard her dead mother's voice singing a mournful Irish air away down in the heart of the hill. However, after a year and a day the voices cease, and the dead are gone forever.

It is a custom in the West, when a corpse is carried to the grave, for the bearers to stop half way, while the nearest relatives build up a small monument of loose stones, and no hand would ever dare to touch or disturb this monument while the world lasts.

When the grave is dug, a cross is made of two spades, and the coffin is carried round it three times before being placed in the clay. Then the prayers for the dead are said, all the people kneeling with uncovered head.

The corpse was wrapped in a shroud or winding-sheet also called esléne which is derived from es, death, and léne, a shirt called a 'death-shirt. Taken either by a cart drawn by an oxen. The deal coffin being a later edition and this then gave the men who carried the man a handle to hold and in then came the edition of a black coach and black horses with plumes of black feathers, allowing of course that one could afford the fee. And in later times the man made hearse driven by man himself. In Ireland today the people turn out to walk the coffin to the Church where it is rested, until the following days service, and it is then, yet again that the folk turn out and walk behind the hearse to the graveside.

Occasionally the bodies of kings and chieftains were buried in a standing posture, arrayed in full battle costume, with the face turned towards the territories of their enemies. In 1848 a tumulus called Croghan Erin in the County Meath was opened, and a skeleton was found under it standing up. The pagan Irish believed that while the body of their king remained in this position, it exercised a malign influence on their enemies, who were thereby always defeated in battle.

Finally, the custom of placing candles on or around the coffin come from the belief that you were lighting the way to paradise for the corpse. This continued as you walked with the coffin to its final resting place. The tradition of walking slowly behind or on either side of the coffin came about because you walked slowly so the candles would not blow out. There is always a simple explanation.
Posted by SilentOwl at 3:56 PM