The Serpent and Saint Patrick. 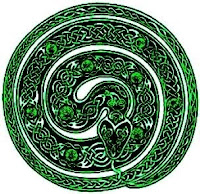 According to legend, St. Patrick drove the snakes out of Ireland. Or to put it more poetically, "charmed them into the sea. Or perhaps the snakes Patrick charmed were sea serpents? However, since the end of the glacial period there were no snakes in Ireland.

St Patrick's famous miracle, the banishment of the snakes, is supposed to have occurred following his Great Fast on Croagh Patrick, outside Westport in County Mayo. St Patrick climbed the mountain where he fasted for 40 days, before expelling all the snakes from Ireland. The fact is that there were never actually any snakes in Ireland to expel, the whole episode is really symbolic of Saint Patrick converting the natives to Christianity and banishing the Druids whose symbol was the serpent and who it is said wore serpent’s eggs as amulets. However, banishing the snakes makes a better story. Serpents and birds, both of which appear in Celtic knotwork, were revered by many people as creatures that could go between the worlds, symbolically and literally.

The snake was a complex Celtic animal symbol calling forth many ideas to the Celts. Representing the process of creation, rebirth, and fertility and healing. Serpents also represented the connection between the rivers and seas as well as the heavens and earth. The snakes protected the entrance to the otherworld as well as being a companion of the gods. Ouroboros the earth serpent represented the coiled energy within the earth and, with her tail in her mouth, infinity. Thanks to the annual shedding of its skin, the snake was the Celtic animal symbolising the cyclical nature of life.

The Christian missionaries would have been disgusted by the folk beliefs of the Irish and would have tried to banish such beliefs from Ireland. The Celts and pre-Celts were animists who believed in many spirits and deities. They believed that spirits dwelled in nature, such as mountains, trees and streams, and had local shrines for worshipping their nature deities. The early Celts of Ireland focused on deities of the local landscapes and while Ireland was an Island, it was not remote from Europe and much trafficking of ideas transpired. Serpent devotion and symbolism was found in the pan-Celtic religion from Britain and Europe, which would have been imported to Ireland. Snakes in this pan-Celtic context were believed to be fertile, destructive, powerful, and self-regenerative, all magical qualities worthy of imitation.

Celtic art is the key evidence of ancient serpent worship and snake symbolism in pre-Christian Ireland. If one looks at the crosses, Celtic knots and designs found in inscriptions, monument details and manuscripts of Ireland, the depiction of snakes abounds.

If, as some have speculated, the Tuatha De Danann, the Irish mythological pre-Christian kingly race, were descended from the Israelite Tribe of Dan, then the serpent would have been associated with the people of Danann. The Israelite Tribe of Dan, also Dann, used the serpent to symbolize their tribe from ancient times. It has been said that in the Book of David, Serpent in Old Arabic means Wise Ones and this would account for Patrick’s attempted banishment of the druid class.

In Ireland the snake symbol was associated with some Celtic goddesses and also with the cult of Crom Cruaich. It has been suggested that Crom Cruaich followers demanded human sacrifice to a serpent deity but there is absolutely no evidence to substantiate this claim. This could have been another invention of either Patrick or Julius Ceasar or both? Crom Cruaich (Lord of The Mound) was the most ancient and venerated god of all the various tribes of Ireland.

She was a very old snake goddess about who little is known. However, because of her linkage to the serpent image she was probably a mother earth goddess, or a goddess of rebirth. There is speculation that her lost legends were once part of long forgotten creation myths.

Description: Local Crone Goddess from County Meath who was transformed into a huge snake for eating forbidden berries. Her original purpose is basically lost in modern times because her stories became so absorbed by Christian legends which attempt to make her a Celtic Eve. It is believed St. Patrick tampered with her legends, which show that St. Patrick killed her with holy water that melted her, but from which she will arise from again. One of the many legends St. Patrick tampered with was that she was originally a virgin Goddess of spring who banished each year the crone she would eventually become in order to further his own aims.
Posted by SilentOwl at 12:23 PM