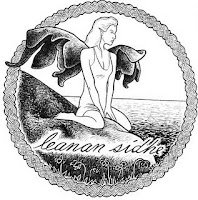 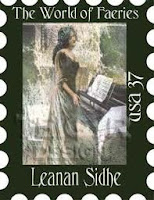 She is a fairy mistress of dreadful power, for she seeks the love and dominion of mortal men, if they refuse her, she is their slave and if they consent they are hers. Most men find that they cannot refuse her. Only one lianhan shee exists and she is more a force than a woman. Each fairy woman who loves ('An Leanan Sidhe' means the love fairy) becomes one with her; and for the mortal man who longs for her she is the one and only. She does not play with emotions; all who love her live for her and their desire for her frequently destroys them.

The more suffering she inflicts the dearer she becomes to them. The more they desire her the more she eludes them. Her absence is like a chain pulling them towards her. An impatient mistress, the lianhan shee creates such desire in her lovers that they will overcome all obstacles to embrace her. She never yields to them in mortal lands, but insists on their meeting in Tir-na-n-Og, so that men must pass through death to enjoy her. All the great poets and musicians loved her; almost all died young. The more they sang the more their bodies withered; until they sang for her forever.

No one has ever described the Leanan Sidhe. Perhaps each stricken man jealously guards his love and fears the worlds knowledge of her. But more likely no mortal can describe her; for she is desire itself and she wishes to elude all attempts to limit her glory. She may select her lovers from our realm, but she never allows her story to remain long on their mortal lips.

Leanan Sidhe is often quoted as meaning "the fairy mistress" or the "fairy sweetheart". She is the famous Celtic muse with such a dark and unearthly beauty that her lover was often distraught with longing and suffering for her absence. In legend, the Leanan Sidhe often takes an artist for a lover, hence the title "the fairy sweetheart". It is said that her lover gives her the vital depth of emotion that she craves and she in turn inspires his genius.

He is the artist, who lost without his inspiration, unable to create his works of art and compositions of song, suffers in a deep depression and sometimes commits suicide or gives up his creative work in despair. Yet an artist who has lost the connection to his muse has failed to honour and nurture the gift he has been given. The role of the artist in the loss of his muse is not often considered or understood.

The self destructive nature of many inspired artists probably lent itself to the misconception that she was evil and dangerous. Evil is not darkness, for darkness she is, and she can also be dangerous and destructive. When her gift is honoured and nurtured, she shines as a luminous light in the darkness. For those who understand her true nature, who do not idolise or fear her, she is a sliver of moonlight in the blackest night.

The most common and widespread myth attached to Leanan Sidhe is that she is a vampire spirit who attaches herself to one man. To this man, an artist or poet, she appears irresistibly beautiful, and if he is seduced by her, he is ruined body and soul. This misunderstanding is not in keeping with her original purpose and is only as recent as Medieval Scotland when she was associated with the Christian superstition of the succubae. It was popularised in print by the poet W.B. Yeats who claimed that she was a "blood sucking vampire" This was a dramatic touch, but is more likely a symptom of the Victorian obsession with succubi along with a bit of poetic license.

Unfortunately, most research on the subject of Leanan Sidhe goes back no farther than the account Yeats held of her. There is a rich and enduring history and deeper meaning to the name Leanan Sidhe that is much more interesting than the popular vampire fantasies.

The translation of her name holds the first clue to whom and what she is. The words are Gaelic and refer to a faery muse. "Leanan" means the love of my soul or spirit...my inspiration. "Sidhe" is the word for a faery. In Irish poetic tradition, she was the muse who appeared to the bard as the "Aisling" or vision. In his vision he meets her on a hillside and she then inspires music or poetry that has an otherworldly sadness and regret for the glorious past of the Irish.

For those who settled the Celtic Countries, this could be a later translation of contact with the women of the Sidhe. The Sidhe are an ancient race (Tuath De Dannan) who once made their home on the Green Islands long before the coming of the Irish. A race that remains to this day, an unannounced yet vital influence upon the imagination.

Leanan Sidhe is a powerful muse who bestows a gift; the ability to create a work of art, music, or poetry with great depth of feeling. The price of her dark and delicate gift is often a sorrow or heartbreak that is born of obsession. An artist may be spent as furiously as he draws from his source, hence the mythos of the artist who when possessed of the Leanan Sidhe lives a brilliant but brief life. Her true purpose is revealed in the creative works she inspires in poets, painters, and musicians. She is an empath who is compelled to inspire love and despair, longing and desire. She teaches the beauty and power of such emotion and that all such feeling is vital to creation with many dark nights of the soul required to convey the sorrow of her history.

She is the Leanan Sidhe, or the love fairy. A powerful creature who seeks the love and domination of mortal men, you might think of her as the femme fatale of the fae realm. She is desire incarnate. If a man falls for her, he becomes hers forever, body and soul. Once she’s ensnared him, he will live only for her and his all consuming passion will often destroy him. She’s a fairy dominatrix, because the more suffering she inflicts on the man, the more he wants her. She’s a tease, and the more he hungers for her, the more she eludes him. The Leanan Sidhe creates such passion in a man that he will do anything; sacrifice everything, to have her.
Posted by SilentOwl at 3:15 PM