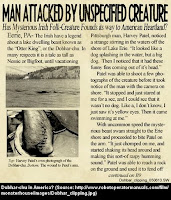 These are the water horses of Ireland and are similar to the Each Uisge and Cabyll-Ushtey. They gallop out of the crashing waves up onto the shore, venturing inland. They are supposed to make excellent mounts for whoever can catch one although riding an Aughisky is not without risk. If they hear or see the sea they set off in an uncontrollable charge, galloping straight back into the watery depths where they came from, taking their helpless rider with them to be torn apart. It has even been suggested that the Aughisky may be the so-called "Irish crocodile," which is more commonly referred to as the Dobhar Chu.

Eyewitnesses have described the animal as a Water Horse which is capable of assuming the characteristics of a man, save for its ears, which retain their horse-like appearance. According to legend the Aughisky pastime was to lure unsuspecting humans onto its back by appearing to be a docile horse. Once the trusting individual was firmly situated on the creature's spine it would suddenly bolt for the nearest lake or riverbed, where it would proceed to devour its victim with the exception of the liver which for some reason it seems to have developed a dislike. It has also been claimed that the skin of the Aughisky has adhesive properties, which would explain why its victims aren't able to leap to safety before plummeting into their watery graves.

There are fairies like a horse that inhabit certain lakes; they seem to be very common, as the Aughinch (the island of the water horse) is not uncommon in connection with most of the lakes. The horse comes out of the water of an evening to graze on the land. In general no bad stories are told about these horses, yet most people are afraid to pass a place they frequent after it is dark.

If a person gets between them and the water, and can steal up and put a halter on them, they can be subdued and used as long as they are not allowed to see their old lake; but if once allowed to see it, all power over them is lost, and various stories of them and their riders dashing into the water never to be seen again are told.

An Aughisky a few years ago frequented Lough Mask, County Mayo, preying on the cattle, until it was laid by a monk of Tourmakeady. Another that lived in Lough Corrib had a serpent's body and a horse's head; this used to feed on the bodies buried in the churchyard to the south-east of Oughterard, but one of the Lees whose sister was buried watched her body and killed the monster, its blood staining the church wall to this day: the holes through which this aughisky came up can be seen along its track through Lemonfield Bog.

A water horse that lived in Litter-craffoe Lake was captured by a boy of the Cooney’s, who was told by a wise woman if he ever let it see the water it would be the death of him. For years it was a faithful horse, but one day he brought it in sight of the lake, into which it shot like an arrow, carrying its rider with it, whom it killed and tore to pieces, he was devoured as blood and fragments of his body floated on the surface of the water.

A ludicrous story is told of Tom C______. He was turning a 'lock of malt' on an island, when he saw a water horse coming towards him. He rushed into his boat and pulled for his life; but when he got to land he met a neighbour who asked him to lend him the boat, as his old mare and foal had just swum across the lake and he wanted to follow them—so much for this aughisky."

November seems the month most likely for the aughisky to be seen, and it is also said that they devoured mortal cattle.

Length up to 21 feet. Its body is as thick as a bull. It has a horse like head and neck with a mane of hair. It has sometimes been described as ‘serpentine’ in shape.

It is seen most frequently in the month of November (from Samhain onwards). It grazes with normal horses. If someone tries to ride it, it will gallop off to the nearest body of water where it will drown and eat its rider. It eats animals and people which it consumes under water although it refuses to eat human livers. It kills by constriction. It can change its shape to a handsome man or a giant bird. It leaves a slimy trail when moving on land.

In the 7th century St. Féchine of Fore compelled an Aughisky to pull his chariot after his horse fell dead.

Source. Thomas Crofton Croker. Fairy Legends and Traditions in the South of Ireland.