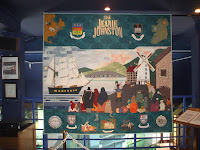 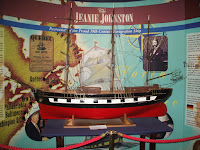 A coffin ship was the name given to the ships that carried Irish immigrants escaping the effects of the potato famine. These ships, crowded and disease ridden, with poor access to food and water, resulted in the deaths of many people as they crossed the Atlantic. While coffin ships were the cheapest way to cross the Atlantic, often more than half of the passengers died during the voyage. It was said that sharks could be seen following the ships in packs because so many bodies were thrown overboard.

There are always going to be exceptions to the rule and in the case of the Jeanie Johnston we have a ship with a record that by 19th century standards was to be envied. A coming together of a ship’s doctor, a ships master/captain and a ship’s owner who tried their best to deliver their passengers to the new world and never lost a life.

The original Jeanie Johnston was built in 1847 on the banks of the St. Lawrence River in Quebec City, Canada. Its architect was the Scottish-born shipbuilder and master craftsman John Munn.

The 408 ton cargo ship was purchased in Liverpool by John Donovan and Sons of Tralee, Co. Kerry. As the famine gripped Ireland, the company ran a successful trade bringing emigrants from Ireland to North America and returning with timbers bound for the ports of Europe.

The Jeanie Johnston made her maiden voyage on 24th April 1848 from Blennerville, Co. Kerry to Quebec with 193 passengers on board. Over the next seven years the ship made 16 voyages to North America carrying over 2,500 emigrants safely to the New World. Despite the seven week journey in very cramped and difficult conditions, no life was ever lost on board the ship - a remarkable achievement which is generally attributed to the ship's captain, Castletownshend-born James Attridge and the experienced Ship's Doctor, Dr Richard Blennerhassett.

The Jeanie Johnston boasted just a single main deck and a poop deck, housing its travellers in very cramped bunks. It offered few comforts on the hazardous journey, which usually lasted about two months, but it was also far removed from the infamous “coffin ships” most notably associated with the thousands of emigrants who perished on the transatlantic voyages in 1847.

The emigrants on the Jeanie Johnston were berthed below deck in the steerage area, where temporary accommodation was rigged up for them, and they were expected to provide their own bedding. They were pressed tightly together in tiny spaces - four to a six foot-square bunk, with two children counting as one adult! It is difficult to visualise that, on one trip, the stalwart ship carried a total of 254 passengers. These brave Irish souls paid the fare of £3.10 shillings to make the heroic journey to the “New World”.

The makeshift quarters used by the emigrants were removed when they disembarked in North America, enabling the ship to perform its secondary role of transporting vital supplies of food and timber back to Ireland on its return journey.

The passengers onboard the Jeanie Johnston has to make do with very limited food provisions during their treacherous journey. They were expected to bring some food on board with them, and also required to provide their own cooking utensils and to cook for themselves. This meant queuing up for a turn on the only stove, located on the main deck, and if the weather was bad, the family would go hungry that day or be reduced to eating raw flour or meal.

The shipping legislation of the times shows how meagre were the weekly provisions allocated to the emigrants onboard:
21 quarts water

Despite the extremely cramped and primitive conditions by today's standards, the Jeanie Johnston was a well run and humanely operated ship which cared as best it could, in the most difficult circumstances, for the fleeing emigrants.

Its enviable record (in the context of 19th century transatlantic voyages) of not having lost a single life to either disease or illness at sea was largely due to the great efforts of Dr. Richard Blennerhassett, supported by the humanitarian attitude of the ship's master, Captain James Attridge. The doctor would ensure that hatches were open every day when possible, that the bedding was aired, the accommodation below deck was kept as clean as possible and that everyone would be encouraged to take a walk on deck each day unless the weather was too rough.

In this regard, the Jeanie Johnston differed from many other ships of the time in that it employed a highly reputable and experienced doctor. In their frequent letters of appreciation to Captain Attridge following their voyage, the passengers also singled out Blennerhassett for praise.

It is also worth remembering that even when the ship met its final end, no lives were lost. In 1856, she was sold as a cargo ship to William Johnson of North Shields in England, and two years later when en route from Quebec (Canada) to Hull (England) with a cargo of timber, she ran into trouble in the mid-Atlantic. Overloaded and waterlogged she sank, but not before all aboard were rescued by a passing Dutch ship. The Sophie Elizabeth, preserving her unblemished safety record.

The Jeanie Johnston holds a powerful spot in Irish folklore because in a time when many people died on immigrant boats, she never lost a passenger.


Two of the above images were taken by me in the museum in County Kerry. The other image is that of a stamp issued by An Post.
Posted by SilentOwl at 10:20 AM