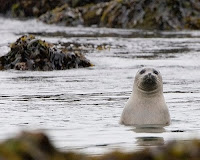 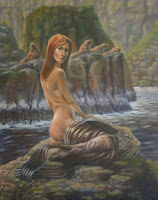 The Selkies or "Seal People"

Ireland is a country rich in mythology and folklore. We are well known for our pleasure and skill in storytelling and song. Our stories are rife with melancholy yet are emotionally compelling. We know that life is a mixture of laughter and sorrow, pleasure and tragedy. Our stories are fanciful, creative and evoke laughter and tears. They also reflect the reality of life and lessons learned.

The myth of the Selkies is about the seal people and has all the qualities of a good Irish tale. In Irish folklore, there are many stories about creatures who can transform themselves from seals to humans. These beings are called selkies, silkies, selchies, roane, or simply seal people.

During the day Selkies exist as seals, swimming in the cool depths of the sea. At night they shed their skins onto the sandy beach and hide them carefully. Their human selves are beautiful with dark hair and eyes and a creamy white skin. Humans are instantly enamored with them and try to win their love. However, the only way a human can keep a Selkie is to find their skin and hide it. A Selkie that is trapped on land will always long for the sea. They will wander the cliffs and beaches singing sadly about their former home.

If a Selkie finds it skin it will return to the sea and never return. If a female Selkie has children with a human she will swim close to their land based home to keep watch over them and sometimes even play with them in the water. The female Selkie is said to be a good wife, yet she is solitary and quiet. Legend tells us that children born of a Selkie have their dark hair and large dark eyes and an unusual affinity with the sea.

The meetings and matings between Selkies and humans are usually accidental. However if a mortal desires a certain Selkie there is a ritual that they can perform. At high tide they must wade into the water and shed seven tears into the sea. Then the Selkie will come in search of that human. In stories it is almost always a human man who steals the skin of a female Selkie. Selkie men are typically seducers of mortal women but are not willing to stay with them preferring to return to the sea immediately.

The origin of selkies is variable, but it is often said that they were fallen angels like the fairies, except that they had fallen into the sea and became seals. Others insist that the selkie were once human beings who, for some grave offense, were doomed to take the form of a seal and live out the rest of their days in the sea. It is also said that selkies were actually the souls of those who had drowned. One night each year these lost souls were permitted to leave the sea and return to their original human form.
Posted by SilentOwl at 3:48 PM