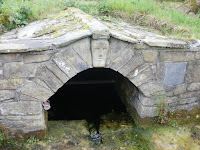 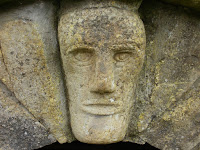 A group of us from The Family of Rowan celebrated Lughnasadh this year at Lugna's well in County Offaly. A monastery was founded here by St. Lugna in the sixth century, situated at the junction between two ancient roads, the Slighe Mór and the Slighe Dála which were two of the great roads in medieval Ireland.

The placename Leitir Lugna means the ‘ wet hillside of Lugna’ which aptly describes the setting for this monastery. The feast day of St Lugna was on April 27th.

All that survives today are the remains of a medieval parish church, the recently restored St. Lugna’s holy well and the outline of the monastic enclosure in the fields to the north and east of the church.

An Early Christian cross-inscribed slab, a medieval human head and an ox head all of which came from Letter church can now be seen in the west gable of the Catholic church in Cadamstown village.

The remains of a barrel vaulted priests chamber are all that survives of Letter church. This was the residence of Conchobhar Ó hÓgáin who in 1473 was accused of both neglecting and selling ‘the precious moveable goods’ of the church and was also accused of keeping a concubine in the ‘priests house’ with whom he later fathered a son. Nice to think there is a bit if consistency within the church to this very day.

T|he Well is still used by people who consider it to hold the cure for warts and other ailments. There is a lovely feeling of peace here. We opened a circle and performed our ritual which included an element of fun as this is the time of 'The Games of Lugh'.

We finished by thanking the spirits of the place and closing the circle. The celebrations carried on with our traditional feast and a good time was had by all in attendance.

Although some members were absent for a variety of reasons we remembered all in our thoughts and look forward to the Autumn Equinox.
Posted by SilentOwl at 1:03 PM