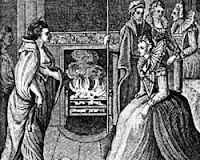 She is known by many names: Grainne Mhaol (Bald Grace), Grainne Ui Mhaille (Grace of the Umhalls), Grania, the Dark Lady of Doona, Grace O'Malley, and Granuaile (Gran-oo-ale). She was a contemporary of Henry VIII, Elizabeth I, Edmund Spencer, Walter Raleigh, and Francis Drake. She was a mother, a pirate, and one of the many great women of Ireland.

Born c. 1530 into the O'Malley family, the hereditary lords of Umhall which included Clare Island, Inishturk, Inishbofin, Inishark and Caher, Grace married into two of the powerful families of Western Ireland, the O'Flaherty of West Connacht and the Burke of Clew Bay. Tradition has it that she is buried (1603) on Clare Island at the Abbey which bears the O'Malley coat-of-arms; Terra-Marique-Potens. Indeed a fitting family motto, for Grace was powerful on land and especially on the sea.

The Pirate Queen Grace O'Malley, also known by her Irish Gaelic name Grainne Ni Mhaille, is one of Ireland's foremost heroines, whose life was the stuff of Irish legend. Grace O'Malley's extraordinary life centres around the 16th Century Tudor conquest of Ireland under Queen Elizabeth I. Grace was the daughter of the O'Malley Clan chieftain who controlled the south west of County Mayo and its coast from their castle on Clare Island. They were a renowned seafaring family who controlled the sea routes along the west coast of Ireland, charging a tax to fishermen and traders.

As England steadily gained control of Ireland, Grace came under increasing pressure to relent to the English crown. An expedition from Galway attacked Grace in her castle on Clare Island, so Grace turned to piracy, blockading the port of Galway and attacking English ships in Galway Bay.

When the English governor of Connaught, Sir Richard Bingham captured Grace O'Malley's two sons, she set sail for England to speak to Queen Elizabeth I face to face. Her ships sailed up the River Thames in London, where Grace met Queen Elizabeth at Greenwich. On meeting the Queen, Grace refused to bow, stating that she herself was a Queen of her land and not a subject of the Queen of England. Their discussion was carried out in Latin as Grainne Mhaol spoke no English and Queen Elizabeth spoke no Irish. The two, who were roughly the same age apparently, admired each other, and reached a truce; Grace would stop attacking English ships and switch to attacking Spanish ones and her sons were returned to her.

Grace O'Malley died at Rockfleet Castle in 1603, the same year as Queen Elizabeth.

In a man's world, Granuaile developed her own power base contrary to Gaelic and English law. She was a woman of singular strength of character and for that became, along with Roisin Dubh and Caitleen Ni Houlihan, a poetic symbol for Ireland:

The gowns she wore was stained with gore all by a ruffian band
Her lips so sweet that monarchs kissed are now grown pale and wan
The tears of grief fell from her eyes each tear as large as hail
None could express the deep distress of poor old Granuaile.

Statue of Grace O'Malley in the grounds of Westport House County Mayo.
Posted by SilentOwl at 4:12 PM