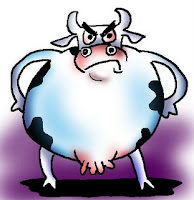 Mary Butters the Carnmoney Witch, was put forward for trial at the Spring Assizes in March 1808. It is an instance of black magic versus white though it should be borne in mind that in the persecution of witches many women were put to death on the latter charge. It should be said at this point that it was the skill and knowledge of these same women in the use of herbs that benefited the population and added greatly to our present day pharmacology. The following story comes from the Belfast News-Letter for 21st August 1807.

One Tuesday night an extraordinary affair took place in the house of a tailor named Alexander Montgomery, who lived nearby Carnmoney Meeting-House. The tailor had a cow which continued to give milk as usual, but of late no butter could be produced from it. An opinion was unfortunately instilled into the mind of Montgomery's wife, that whenever such a thing occurred, it was occasioned by the cow having been bewitched. Her belief in this was strengthened by the fact that every old woman in the parish was able to relate some story illustrative of what she had seen or heard of in times gone by with respect to the same.

At length the family were informed of a woman named Mary Butters, who resided at Carrigfergus. They went to her, and brought her to the house for the purpose of curing the cow. About ten o'clock that night war was declared against the unknown magicians. Mary Butters ordered old Montgomery and a young man named Carnaghan to go out to the cow-house, turn their waistcoats inside out, and in that dress to stand by the head of the cow until she sent for them, while the wife, the son, and an old woman named Margaret Lee remained in the house with her.

Montgomery and his ally kept their lonely vigil until daybreak, when, becoming alarmed at receiving no summons, they left their post and knocked at the door, but obtained no response. They then looked through the kitchen window, and to their horror saw the four inmates stretched on the floor as dead. They immediately burst in the door, and found that the wife and son were actually dead, and the sorceress and Margaret Lee nearly so. The latter soon afterwards expired.

Mary Butters was thrown out on a dung-heap, and a restorative administered to her in the shape of a few hearty kicks, which had the desired effect. The house had a sulphureous smell, and on the fire was a large pot in which were milk, needles, pins, and crooked nails. At the inquest held at Carnmoney on the 19th of August, the jurors stated that the three victims had come by their deaths from suffocation, owing to Mary Butters having made use of some noxious ingredients, after the manner of a charm, to recover a sick cow.

She was brought up at the Assizes, but was discharged by proclamation. Her version of the story was, that the devil in the guise of a black man had appeared in the house armed with a huge club, with which he killed the three persons and stunned herself. Lamentable though the whole affair was, as well for the gross superstition displayed by the participants as for its tragic ending, yet it seems to have aroused no other feelings amongst the inhabitants of Carnmoney and Carrigfergus than those of derision.

Mary Butters continued to practice her art for decades afterwards and was still consulted by the locals in the respect of bewitched cows. Thankfully the witchcraft act was repealed in 1821.
Posted by SilentOwl at 3:23 PM