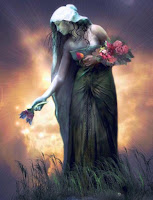 The "Lebor Gabála Erren" ("The Book of the Taking of Ireland"), compiled during the 12th century A.D. describes the coming of the mysterious Tuatha de Danann or Tribe of Danu.

They were apparently tall, blond or red-haired strangers, "expert in the arts of pagan cunning", who supposedly interbred with the locals, while teaching them many kinds of useful skills.

The Lebor Gabála Erenn records their dramatic entrance to Ireland as follows:

"In this wise they came, in dark clouds from northern islands of the world. They landed on the mountains of Conmaicne Rein in Connachta, and they brought a darkness over the sun for three days and three nights. Gods were their men of arts, and non-gods their husbandmen."


There are many stories of aerial ships or "demon ships" ("loinger demnacda") in the Irish annuals.

According to the mythic tales the Tuatha de Danann were advanced enough to arrive in western Ireland (near modern Connacht) by air. They divided into two social classes:

1. "gods" as teachers of medicine, smithing, communication or druidry
2. "non-gods" as farmers or shepherds.

They are immortals and the only thing that can harm them is iron. The fact that only iron can harm the Tuatha de Danaans may have a deeper meaning. It is possible that the Danaans were a Bronze Age race that was defeated by an Iron Age race, the Milesians. Legend has it that the weapons of the Tuatha de Danaans were made of bronze and that when they met the Milesians in battle they were defeated because the Milesian weapons were made of iron.

The Tuatha de Danaan fled and went underground hiding in caves within the mountains and hills. They became known as the fair folk due to their fair hair and complexion this in time became fairy folk. They are said to fear iron as it was responsible for their defeat and they flee from it whenever they see it.

This in turn would account for many of our superstitions surrounding iron. I will cover some of those in a later post. This is just one version of the Tuatha de Danann. However, there are many more.
Posted by SilentOwl at 12:53 PM