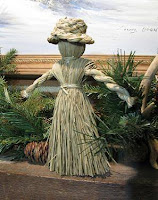 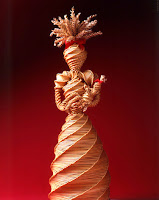 History of the Corn Dolly

Before Christianity took hold in Ireland (and even afterwards) within the traditional pagan agricultural culture it was believed that the spirit of the corn lived amongst the crop, and that when the crop was harvested it was made effectively homeless.

The people believed a spirit lived in the field and as they cut the harvest the spirit retreated before them. The last bunch of corn was kept and given to the oldest man to plait and keep it on the wall until the following year's crop was sewn when the spirit would be returned to the field by being shaken from last year’s corn bunch.

In Ireland, the final sheaf was gathered with great ceremony, celebrating the living things that might be living within it. If you think about it, that makes sense, a cornfield is a perfect nesting place for small animals, such as rabbits, mice, birds, or frogs. As the reaper’s harvested the crop, the animals within fled, until there was only one sheaf left. Since the animal was more often than not a small, very frightened hare, the phrase "putting the hare out of the corn" came to mean the end of the reaping.

James Frazer devotes chapters in The Golden Bough to "Corn-Mother and Corn-Maiden in Northern Europe" (chs. 45-48). Among the customs attached to the last sheaf of the harvest were hollow shapes fashioned from the last sheaf of wheat or other cereal crops. The corn spirit would then spend the winter in this home until the "corn dolly" was ploughed into the first furrow of the new season. "Dolly" may be a corruption of "idol" or may have come directly from the Greek word eidolon, which means ghost/spirit or image.

An odd tradition in some areas was the use of the final sheaf to find the corpse of a drowning victim. The sheaf was placed in the water with a lit candle upon it, near where the person was believed to have fallen in. The sheaf drifted, and it was believed that it would come to rest where the body was submerged. It was thought that only the final sheaf had the magical ability to find these lost souls.

Regardless of how it was used, the cutting of the final sheaf meant that the grain harvest was over. Now bread baking could begin, and food stored away for the coming winter months.

Corn Dolly making is an ancient craft going back thousands of years, when as previously stated, it was thought that a spirit lived in the cornfields. To preserve this spirit at harvest time, and ensure the success of next year's harvest, a corn dolly was made for it to rest in. Ivy was a symbol of rebirth, and so it wasn't uncommon to dress the corn doll with a headdress of ivy.

The Corn Dolly was originally made to appease the corn spirit with the hope of a good harvest the following year. Traces of corn dolly shapes have been found dating back to 2000 B.C. and it has always been the tradition to plough the previous year’s dolly back into the field the following year.

A little known fact is that amongst the other skills that the Dagda has been associated with is carpentry. Very little lore remains about this skill from the old days. However, among the things that do survive is the custom of the carpenter placing corn dollies in the eves of a new building. Nowadays, the Corn Dolly is a decorative symbol of peace and prosperity and can be found in rural homes throughout the year.
Posted by SilentOwl at 3:06 PM