The Jokers of the Otherworld. 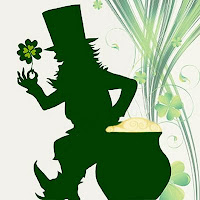 The name leprechaun may have derived from the Irish leath bhrogan (shoemaker). These apparently aged, diminutive men are usually to be found in a drunken state, caused by drinking poteen. However they never become so drunk that they don’t know what they are doing.

Leprechauns have also become self-appointed guardians of ancient treasure (left by the Danes when they rampaged through Ireland), burying it in crocks or pots. This may be one reason why leprechauns tend to avoid contact with humans whom they regard as foolish and greedy creatures. If caught by a mortal, he will promise great wealth if allowed to go free.

He carries two leather pouches. In one there is a silver shilling, a magical coin that returns to the purse each time it is paid out. In the other he carries a gold coin which he uses to try and bribe his way out of difficult situations. This coin usually turns to leaves or ashes once the leprechaun has parted with it. However, you must never take your eye off him, for he can vanish in an instant.

The leprechaun 'family' appears split into two distinct groups - leprechaun and cluricaun. Cluricauns may steal or borrow almost anything, creating mayhem in houses during the hours of darkness, raiding wine cellars and larders. They will also harness sheep, goats, dogs and even domestic fowl and ride them throughout the country at night.

Although the leprechaun has been described as Ireland’s national fairy, this name was originally only used in the north Leinster area. Variants include lurachmain, lurican, lurgadhan.

Cluricaunes are a type of otherworldly creature similar to the Leprechaun, they have usually been seen sitting by the hearth of a fire and are always described as wearing a red jacket and a green high cap with a feather sticking in it. They are small in stature and usually appear as wizened old men. They can do mischief, grant wishes and poke fun at humankind.

Often confused with the other solitary fairies known as Lepracauns or the Fear Dearg they prefer to be indoors and do not like to do any physical labour. They like any kind of alcoholic beverage and can be found in the cellar's of rich men, helping themselves to whatever they fancy of wine and whiskey.

The name Far Darrig is an English pronunciation of Fear Dearg, which means Red Man. He is called this because of the red coat or cloak (some say this is coloured with the blood of his enemies), woollen stockings that cling to his calves, and hat that he wears. He has a short stocky body with yellow splotches on his face, and is known to be a practical joker with a gruesome sense of humour. He can manipulate his voice to sound like waves crashing on the rocks, or cooing pigeons, but his favourite sound is that of a dead man's hollow laugh apparently coming from a grave.

He can travel invisibly, and is highly amused by mortal terror. Sometimes he will invite a mortal to enter a lonely bog hut, and then orders them to make dinner of a hag which is skewered on a spit. The man usually faints, and when he comes around he hears the sound of laughter in the air, but the Fear Dearg is nowhere to be seen. It is said his laughter will haunt you to the grave.

There are many contradictory facts about the Fear Dearg, the first one being whether he is one creature or three. Some sources claim that Fear Dearg, the Leprechaun, and the Clurichaun are one and the same creature, as they are all solitary, withered and old, unlike other fairies. According to other sources though they are related. And although the vast majority of sources say he is Irish, he also pops up in some Scottish stories.

In Donegal he is known for being a tall creature, but in Munster he is reported to be 2'6" (75cm) tall, and wears a sugarloaf cap, has long grey hair and a wrinkled face. He would enter a home and ask to warm himself by the fire, and if he liked the people they would have good luck, but if he did not he would play a trick on them. To refuse his request was always very unlucky!

If you recognise him when you meet him, you should say 'Na dean maggdh fum' which means do not mock me, as this will prevent him from playing nasty tricks on you. The problem is that he plans his tricks so well that by the time you realise who he is, it is too late to say do not mock me. Sometimes he sends nightmares to wreck people's sleep.

Despite the grotesque pranks that he plays, he is actually good natured and will bring good luck to those he likes. He just enjoys taunting them first.
Farmers consider him lucky to have around, though no reason is given for this.

Perhaps not as well known as other characters from Celtic mythology, the actions of the Fear Dearg, or Red Man, show that being mischievous could result in good luck or bad luck, and to be sure of good luck it was always best to be welcoming to strangers.
Posted by SilentOwl at 10:47 AM

Email ThisBlogThis!Share to TwitterShare to FacebookShare to Pinterest
Labels: Superstition.