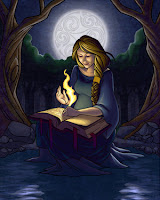 February 1st is a special day on the ancient Irish calendar. It's known as La Fheile Bride, Brigid's Day. This day is a celebration of the ancient Irish goddess Brigid, and marks the start of the spring festival called Imbolc.

Brigid was the Goddess of Fire, whose manifestations were song, craftsmanship, and poetry - which are considered the flame of knowledge. As a healing goddess, she governs childbirth and the birthing time. That Brigid was highly regarded as a healing goddess as can be seen from the numerous healing wells dedicated to her all over Ireland. As a goddess of poetry, she governs not only the inspiration and writing of poetry, but also divination and prophecy. As a goddess of smithcraft, she governs the forge's fire. It is for these reasons that she is considered the "Bright Goddess" and is associated with the element of fire.

Here in Ireland, during Imbolc, the land was ploughed to receive the new seed with spade and horse-drawn plough; calves and lambs were born, and fishermen waited impatiently for the end of the winter storms and rough seas to launch their boats again. Foods traditionally eaten during Imbolc are lamb stew, poppy seed bread, honey cakes and baked custard. Imbolc is seen as a time of hope and renewal - as the land comes alive again with the passing of winter. Sometimes imagery is used. Just as at New Year's Eve when we often see the image of old, bearded Father Time representing the old, outgoing year replaced with a young baby which celebrates the year just born, at Imbolc, we have similar imagery; an old crone represents the outgoing year, and turns things over to a young maiden. Fertility, of course, plays a part here. The frozen earth is incapable of growing things, just as the old crone has grown incapable of producing offspring. This barrenness is replaced by the warm return of Spring, making the earth once again fertile, symbolized by the fertile young maiden.

Traditionally, at this time, a number of customs are followed. The home is cleaned (Spring cleaning) in preparation of a visit from Brigid, especially the fireplace. A birch branch should be used to symbolically sweep the floor, as this has strong links with her.

In days gone by the man, or men, of the house would make a Brideog. This was a doll shaped object made from long pieces of straw or rushes which was dressed in white doll clothing or merely wrapped in a white cloth in the manner of a dress. The "doll" would then be decorated with bits of seashells and flowers. This object symbolised a "little Brigid" which was then brought from house to house carried by a young lady of the household. Entertainment was then provided for the houses you visited in the form of songs and jokes. Upon arriving home, a feast was then had with the Brideog leaning against one of the legs of the dining table. Boxty pancakes, apple cake, dumplings and colcannon (Potatoes, cabbage and onion mixed with milk.) were normally on the menu. Any extra straw / reeds would be saved and used for the manufacture of Brigid’s crosses.

It is believed Brigid travels around the countryside on the eve of her festival, blessing both the people and their livestock. To show that her visit was welcome, families would place a cake or pieces of bread and butter on the windowsill. In some parts of Ireland, the bread would be an oatmeal loaf in the shape of a cross which was specially baked for the occasion.

It is in this way that the winter is ushered out and the spring welcomed, as the storms subside, the gorse begins to flower, the snowdrops and daffodils begin to break the surface and the days begin to lengthen once again.

The Irish goddess Brigid is unusual among deities because she is found in several different religions. References to her are found in ancient Paganism, Neo-Paganism, Christianity and Voodoo.

Both Neo -Pagans and Pagans of old worshiped Brigid as a Celtic Pagan triple goddess. The term triple Goddess refers to the belief that some deities have three distinct aspects covering the maiden, mother and crone phases of life. Brigid has power over childbirth, motherhood, smith craft, peace, unity, poetry, inspiration, healing, hearth and home among others.

Brigid also appears in Voodoo as Maman Brigette. Scholars believe that worship of Brigid came to the Caribbean islands along with Irish people who had been kidnapped, enslaved and forced to the islands to work. Maman Brigette is said to drink hot peppers and reportedly has a very dirty mouth using obscenities frequently. Voodoo dogma holds that Maman Brigette will protect graves if the gravestone is marked with a cross.

Brigid, the Celtic goddess of fire (the forge and the hearth), poetry, healing, childbirth, and unity, is celebrated in many European countries. Born at the exact moment of daybreak, Brigid rose into the sky with the sun, rays of fire beaming from her head. She was the daughter of Dagda, the great 'father-god' of Ireland.

In Druid mythology, the infant goddess was fed with milk from a sacred cow from the Otherworld. Brigid owned an apple orchard in the Otherworld and her bees would bring their magical nectar back to earth. It is said that wherever she walked, small flowers and shamrocks would appear. As a sun goddess her gifts are light (knowledge), inspiration, and the vital and healing energy of the sun.

Legend holds that Brigid began the Irish tradition of keening (crying,wailing, and singing) over the body of a deceased person at a wake. As outlined in the following story.

Brigid became the wife of Bres, an Irish king. Together they produced three sons, each of them became a famous warrior. Brigid and her husband came from two warring tribes and hoped their marriage would end the enmity between their kin.

Unfortunately, it did not. However, as it turns out, the battlefield death of their son Ruadan assured Brigid's role as a goddess of peace and unity.
A major battle between the two families was about to begin.

Brigid's eldest son, using the knowledge of metalsmithing that he had learned from his mother, struck the first blow, killing the smith of the opposing army. But as the warrior fell to the ground, he managed one last blow before he died and Ruandan was also killed.

Brigid's grief was enormous--for the continual hatred between the two sides of her family and for the death of her son. Her lamentations were so loud they were heard throughout Ireland and so heart-rending that both sides left the battle and forged a peace. The goddess Brigid is said to have originated the practice of "keening".
She is also credited with the invention of whistling, which she used to summon her friends to her side.

Eventually the love and respect for the goddess Brigid brought unity to the Celts who were spread throughout Europe. Regardless of their differences, they all agreed upon her goodness and compassion.

One of the most popular tales of the goddess Brigid involved two lepers who appeared at her sacred well at Kildare and asked to be healed. She told them that they were to bathe each other until the skin healed. After the first one was healed, he felt only revulsion for the other and would not touch him to bathe him. Angered, Brigid caused his leprosy to return. Then she gently placed her mantle (cloak) around the other leper who was immediately healed.

Ireland is full of springs and wells named after the goddess Brigid. Symbolically, water is seen as a portal to the Otherworld and as a source of wisdom and healing. There is a saying that Brigid rewards any offering to her, so offerings of coins were often tossed into her wells, the forerunner of the modern custom of throwing a penny into a fountain while you make a wish.

At her most famous shrine Brigid taught humans how to gather and use herbs for their healing properties, how to care for their livestock, and how to forge iron into tools. As a goddess of childbirth and protector of all children, she is the patroness of midwifery. This shrine, near Kildare, was located near an ancient Oak that was considered to be sacred by the Druids, so sacred in fact that no one was allowed to bring a weapon there.

The shrine is believed to have been an ancient college of priestesses who were committed to thirty years of service, after which they were free to leave and marry. During their first ten years they received training, the next ten were spent tending the sacred wells, groves and hills of the goddess Brigid, and the last decade was spent in teaching others.

Nineteen priestesses were assigned to tend the perpetual flame of the sacred fire of Brigid. Each was assigned to keep the flames alive for one day. On the twentieth day, the goddess Brigid herself kept the fire burning brightly.
The goddess Brigid was also revered as the Irish goddess of poetry and song. Known for her hospitality to poets, musicians, and scholars, she is known as the Irish muse of poetry.

The goddess Brigid lends us her creativity and inspiration, but also reminds us to keep our traditions alive and whole. These are gifts that can sustain us through any circumstance.

Her fire is the spark of life.

Image is Brigid by tattereddreams on DeviantArt.
Posted by SilentOwl at 11:20 AM