Goibhnui. God of Blacksmiths and MetalCraft. 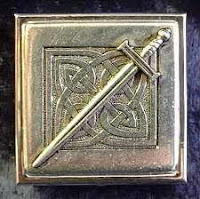 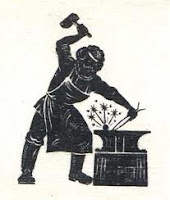 Goibhnui. The Sword Smith of the Celtic Gods. God of Blacksmiths/MetalCraft.

In Irish mythology Goibniu (Old Irish) or Goibhniu (Modern Irish), pronounced gov-nu was the smith of the Tuatha Dé Danann. The name of his father appears as Esarg or Tuirbe Trágmar, the thrower of axes. Irish texts do not mention his mother but his counterpart in Welsh mythology, Gofannon, is a son of Don.

He is grouped alongside Luchtaine the carpenter, Creidhne the wright and Dian Cecht the leech, in the Lebor Gabála Érenn, he is described as ‘not impotent in smelting,’ and is said to have died, along with Dian Cecht, of a ‘painful plague’.

He and his brothers Creidhne and Luchtaine were known as the Trí Dée Dána, the three gods of art, who forged the weapons which the Tuatha Dé used to battle the Fomorians. The weapons that Goibhnui made however were no ordinary weapons. As he said to his family before they faced the Fomors. "I will replace every broken lance and sword with a new one, even though the war last seven years. I will make the lances so well that they shall never miss their mark, or fail to kill, the fate of the fighting will be decided by my lances,"

Regarded not just as weapons, but as tools there is a long tradition of Irish soldiers uttering charms and incantations over their swords prior to battle up to and beyond the Iron Age.

His weapons were always lethal, and his mead gave the drinker invulnerability. His name can be compared with the Old Irish gobae, gobann meaning smith. The following story is told about Goibhnui.

In "The Second Battle of Magh Turedh," Ruadan son of Bres and Brighidh was sent to kill Goibniu. As Ruadan was 3/4 Tuatha Dé Dannan (and a grandson of the Dagda), the Fomorians felt that he would make a good spy (It may have been the first case of Industrial espionage). He asked for the impliments of a spear from Goibhniu, and had the weapon assembled by a woman named Cron. Ruadan then took the spear and flung it at Goibhniu who, although wounded, pulled out the spear and killed Ruadan. At his death, Brigid invented the practise of keening--that high-pitched wailing for the dead, sometimes associated with the beansídhe.

Goibhniu then went to the Well of Slaine, provided over by Dian Cecht and his family, and was healed of his wounds by its magic waters. He then returned to battle, making weapons for the Tuatha Dé Dannan, who eventually won Ireland from the Fomorians. It was Goibhniu that provided Lugh with the spear that penetrates Balor's eye.

Along with his smithing, Goibhniu was often seen as a healer; his name is invoked on an Old Irish charm to aid removal of a thorn. More significantly, he is host of an other-worldly feast, Fled Goibhnenn, where guests imbibed great quantities of an intoxicating drink now identified with ale. Instead of getting drunk, those attending would be protected from old age and decay. Commentators see in this yet another link with Hephaestus, the Greek smith-god, who provides the other gods drink in the Iliad. Goibhniu's forge, Cerdchae Ghaibhnenn, was usually thought to lie east of Mullaghmast hill in Glenn Treithim along the Kildare-Wicklow border. The once abundant copper ore in this area allowed early metalsmiths to make shields and spear-points. Other traditions place the forge on the Beare peninsula, Co. Cork, and elsewhere.


Genealogies disagree about Goibhniu's lineage. He may be a grandson of the war-god Néit, as is Balor, and one of the four sons of Esarg, along with Credne, Luchta, and Dian Cécht, the healing god. In an alternate text he is the brother of the Dagda, Nuadu Airgetlám, Credne, and Luchta, with whom he helps to conquer Ireland for the Tuatha Dé Danann. In yet other texts Tuirbe Trágmar the axe-thrower, father of the Gobbán Saor, is named as Goibhniu's father. Sometimes Goibhniu is named as foster-father of Lugh instead of Manannán mac Lir.

Much of Goibhniu's characterisation survives in the folk figure Gobbán Saor a legendary craftsman who built the round towers. There are also echoes in Gaiblín, owner of the fabulous cow Glas Ghaibhleann. His Welsh counterparts are Gofannon and Glwyddyn Saer.

For the Tuatha De Danann, Goibhniu the smith made spearheads and swords, Creidne the brazier rivets that would not break, Coirpre the poet or bard satirized the enemy, Ogma supplied the warrior-power, the Dagda promised to slay with his massive club, and Diancecht prepared to bring the De Dannan dead back to life by putting them into a magic well or cauldron.
Posted by SilentOwl at 3:56 PM