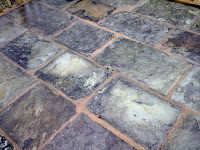 The burial of horse skulls beneath the floor of a house is reasonably wide-spread in Ireland and it has been the subject of two interpretations – foundation sacrifices and acoustic enhancement.

In 1945 Sean O’Suilleabhain published an article – ‘Foundation Sacrifices’ in the Journal of the Royal Society of Antiquities of Ireland (Vol75, part 1, pp.45-52). In it he related the results of an inquiry carried out by the Irish Folklore Commission to a number of informants scattered throughout the Republic.

Eleven people responded that they were acquainted with the practice of burying one or more horse skulls beneath the floor of a house. With the exception of one correspondent from Co. Galway who suggested that the burial was made to bring luck to the house, all other correspondents associated the burials of the skulls with making an echo’, especially for dancing.

O’Suilleabhain, however, argued that this acoustic explanation was merely a practical justification for continuing an ancient pagan practice of sacrificing an animal and burying it on the erection of a building. This was done in order to secure the protection of the victim and bring luck to the householders as well as to ensure the stability of the structure. O’Suilleabhain cited examples from around the world (Scandinavian, English etc) and suggested that such practices may have gone back to the Bronze Age in Ireland.

The second hypothesis, acoustic enhancement, takes the explanations of the practice made by O’Suilleabhain’s informants at face value. i.e., it explains the burial of skulls as an attempt to provide a hollow area below clay stamped floor or stone flagging so that it would increase the sound of musicians and dancers in a room.

The use of horse skulls to create sounding boxes is by no means limited to the Republic and has been discovered on a number of occasions in Ulster. Dr Alan Gailey describes in the Yearbook of the Ulster Folklore and Transport Museum (1969-70: 13-14) the discovery of nine horse skulls beneath a house floor near Crossgar, Co. Down and another from an 18century house in Crumlin, Co. Antrim. Dr Gailey points out that these finds as well as others reported tend to associate with ceilidh houses.

Horse skulls were buried under the floor or in recesses in the walls of a house. When the drawing-room floor of Edenvale house near Ennis was taken up, four horse skulls were found, one in each corner.

At Moyreisk, a house of the Vesey Fitzgerald family near Quin, horse skulls were found in recesses in the wall.

These burials might be regarded like the broken querns placed in house foundations at Torry Island in Donegal, and cats built up alive in the walls of houses in Dublin and elsewhere, as substitutes for human sacrifices.

That such sacrifices were not unknown to the early Irish seems implied in the startling story of St. Columba’s disciple buried as a voluntary sacrifice in the foundations of a new building.

Jamieson (History of the Culdees) writes of legends associated with the monastery of St. Columba at Iona. In one story, the saint could not build a church there because a devil kept throwing down the walls as soon as they were built. The early Christians referred to all Pagan gods as ‘devils’. Only a human sacrifice buried in the foundations solved the problem.

Hadrian Allcroft writes that Columba “called for a volunteer human sacrifice to consecrate his new house”. Columba announced to his convent, “it would be well for us that our roots passed into the earth here”. He goes on:

It is permitted to you that one of you go under the earth of this island to consecrate it.

If you will accept me, I am ready for that.

The outcome was that Odhran then went to heaven and He (St. Columba) founded the church of Hy.

The Rev Baring Gould writes that Columba consecrated Hy “by the burial of a monk of his own retinue, a sufficiently obvious case of what we should today call human sacrifice”.

According to G Higgins (The Celtic Druids), a human body was found under each of the twelve pillars of one of the circular temples of Iona. Reeves notes that “the principal, and now the only cemetary in Hy is called the Railig Orain, after Odhran not Columba.”
Posted by SilentOwl at 1:57 PM