Aengus. God of Love and Inspiration. 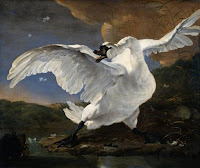 In Irish mythology, Óengus (Old Irish), Áengus (Middle Irish), Aengus or Aonghus (Modern Irish) is a member of the Tuatha Dé Danann and the god of love, youth and poetic inspiration. He was said to have four birds symbolizing kisses flying about his head (this could be the origin of the xxxx's, kisses at the end of lovers' letters come from).

His parents were the Dagda and Boann. He was said to have lived at Newgrange by the river Boyne.

The Dagda had an affair with Boann, wife of Nechtan. In order to hide their affair, the Dagda made the sun stand still for nine months; therefore, Aengus was conceived, gestated and born in one day. Midir was his foster-father.

When he came of age Aengus dispossessed the Dagda of his home, the Brú na Bóinne (an area of the Boyne River Valley that contains the Passage tombs Newgrange, Knowth and Dowth). He arrived after the Dagda had shared out his land among his children, and there was nothing left for Aengus, so Aengus asked his father if he could live in the Brú for a day and a night, and the Dagda agreed. However, Irish has no indefinite article, so "a day and a night" is the same as "day and night", which covers all time, and so Aengus took possession of the Brú permanently.

In a different version of this story, appearing in "The Wooing of Étaín", Aengus uses the same ploy to trick Elcmar out of Brú na Bóinne, with the Dagda's connivance. In this version, Midir is Aengus's foster-father, while Elcmar is the husband of Boann seduced by the Dagda.

According to the Death Tales of the Tuatha de Danaan, Aengus killed his step father Elcmar for killing Midir.

Aengus also slew the poet of Lugh for lying about his brother Ogma an Cermait. The poet claimed that Ogma was having an affair with one of Lugh's wives. Aenghus killed the poet in front of Midir.

Aengus fell in love with a girl he had seen in his dreams. His mother, Boann, searched Ireland for an entire year. Then his father, the Dagda, did the same. Finally, King Bodb Dearg of Munster found her after a year.

Aengus went to the lake of the Dragon's Mouth and found 150 girls chained up in pairs. He found his girl, Caer Ibormeith. On November 1, Caer and the other girls would turn into swans for one year, every second Samhain. Aengus was told he could marry Caer if he could identify her as a swan. Aengus succeeded. He turned himself into a swan and they flew away, singing beautiful music that put all its listeners asleep for three days and nights.

Aengus was the foster-father and protector of Diarmuid Ua Duibhne of the Fianna. He rescued Diarmuid and Gráinne from one or two tight spots during their pursuit by the Fianna.

He owned a sword named Moralltach, the Great Fury, given to him by Manannan mac Lir. This sword he gave to his foster-son Diarmuid. There was also a sword named the Little Fury and two spears of great power that he gave to Diarmuid. When the young man died, Aengus took his body back to the Brugh where he breathed life into it whenever he wanted to have a chat.

There are other legends that he was able to repair broken bodies and return life to them.

The name Angus means “exceptional strength.” So we can imagine him with a physique and charm so mesmerizing as to make us dream of love.

As with every mythological hero, god or creature, the mythology is created as the story is told. So you will find many versions of the tales of Aengus. Most agree:

It is said he carries dreams in his bag and may give you one at night while you sleep.

His story of love with Caer symbolizes the dedication of twin lovers, souls who are happiest when they are together.

The Song of Wandering Aengus.

I went out to the hazel wood,
Because a fire was in my head,
And cut and peeled a hazel wand,
And hooked a berry to a thread;
And when white moths were on the wing,
And moth-like stars were flickering out,
I dropped the berry in a stream
And caught a little silver trout.

Though I am old with wandering
Through hollow lands and hilly lands,
I will find out where she has gone,
And kiss her lips and take her hands;
And walk among long dappled grass,
And pluck till time and times are done
The silver apples of the moon,
The golden apples of the sun.

By William Butler Yeats.
Posted by SilentOwl at 4:53 PM