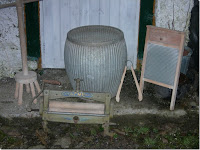 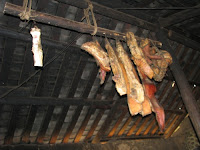 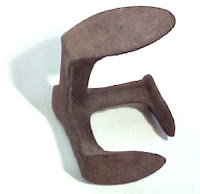 Washing your clothes in days gone by was not as easy as it is today. The woman of the house had to use the tub and wash board. She would have a big chunk of green soap (fairy) and buckets of water that she had to heat on the range (before the range it would be over the open fire). Getting water was very labour intensive as she had to go to the well and pump. She would soak the clothes then rub soap on them and then scrub them up and down the wash board until she had a good lather then plunge them into the water. She would eventually be able to put the washing through the rollers of the wringer and in summer hang them outside either on a line or over the Whin bushes (Gorse). The thorns stopped the clothes from blowing away in the breeze.

Ironing your clothes was done with a flat iron, this was heated over the open fire or on the range. They were made from cast iron and heavy to use. You would need a few of them because as you used one you had others heating up. The normal way to test how hot they were was to spit on them. Eventually the flat iron was replaced with the box iron. This was a hollow type that was filled with hot embers or a piece of red hot metal that had been heated in the fire. It had a lift up door in the back into which the hot material was placed and if you were careful you could use a small pair of bellows to blow air in to increase the heat.

In many of the old vernacular cottages there was no bathroom so bath night was in front of the fireplace. This was done in a tin bath, often on a Saturday night so you were nice and clean for Sunday when every child was dragged off to church. Again water had to be carried from the well and heated over the fire or on the range so it might have been used for more than one child.

Many homes in rural areas did not have an inside toilet until well into the Twentieth Century. This meant a long trek out into the garden to use a dry toilet. This was a particular problem at night when it was not easy to find your way in the dark. The solution to this was to use a chamber pot. The chamber pot also had another name “The gozunda” because it goes under the bed.

A cobbler’s last was owned by every house and this was used to either make or repair the family’s shoes.

Oil lamps and Rushlights that also had a candle holder attached were used to supply light before electrification came to rural Ireland.

A common sight in old cottages would be the slabs of cured or smoked bacon hanging from the rafters. The way you ‘smoked’ the bacon was by hanging it on a metal hook up the chimney stack, the bacon was then cured by the rising wood smoke from the fire. I suppose it might even be at the mercy of the turf smoke?

Image One: An early washing machine??
Image Two: Slabs of smoked or cured bacon hanging from the rafters.
Image Three: A flat iron.
Image Four: A cobbler's last.
Image five: A chamber pot or gozunda??
Posted by SilentOwl at 9:59 AM