Folklore of The Hedgerow. Part Six. 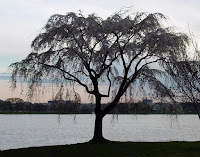 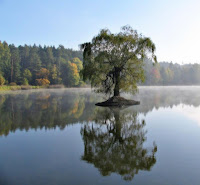 The Folklore of The Hedgerow. Part Six.

Folklore of The Willow. Saileach.

In early Irish law the Willow was classified as an Aithig fedo or Commoner of the Wood.

Most willow species grow and thrive close to water or in damp places, and this theme is reflected in the legends and magic associated with these trees. The moon too recurs as a theme, the movement of water being intimately bound up with and affected by the moon. For example, Hecate the powerful Greek goddess of the moon and of willow, also taught sorcery and witchcraft, and was 'a mighty and formidable divinity of the Underworld'. Helice was also associated with water, and her priestesses used willow in their water magic and witchcraft. The willow muse, called Heliconian after Helice, was sacred to poets, and the Greek poet Orpheus carried willow branches on his adventures in the Underworld. He was also given a lyre by Apollo, and it is interesting to note that the sound boxes of harps used to be carved from solid willow wood.

Willow was often the tree most sought by the village wise-woman, since it has so many medicinal properties, and eventually the Willow’s healing and religious qualities became one and the tree became called ‘witch’s tree’. The Willow is also associated with the faeries. The wind in the Willows is the whisperings of a fairy in the ear of a poet. It is also said that Willow trees can uproot themselves and stalk travellers at night, muttering at them.

Country folk have been familiar with the healing properties of willow for a long time. They made an infusion from the bitter bark as a remedy for colds and fevers, and to treat inflammatory conditions such as rheumatism. Young willow twigs were also chewed to relieve pain. In the early nineteenth century modern science isolated the active ingredient responsible, salicylic acid, which was also found in the meadowsweet plant. From this the world's first synthetic drug, acetylasylic acid, was developed and marketed as Aspirin, named after the old botanical name for meadowsweet, Spirea ulmaria.

The Willow is linked to grief and in the 16th and 17th centuries jilted lovers would wear wreaths of willow and many unrequited love poems were written that included reference to the willow.

In Irish folklore it couldn’t be more different as here it was called sail ghlann grin or the ‘bright cheerful sallow’. Here it is considered lucky to take a sally rod with you on a journey and a sally rod was placed around a milk churn to ensure good butter. It was believed that the charcoal left behind after burning willow could be crushed and spread on the back of an animal as a way of increasing fertility and even restoring hair.

The willow because of its link with water, milk and cattle, is particularly associated with the river goddess Bóinn. Bóinn was depicted as a great cow and the milk that flowed from her udders were said to form the waters of the Boyne.

It is estimated that the Willow in Ireland provides support in the form of habitation and food for 266 different insect species.The Willow is associated with enchantment, wishing, romantic love, healing, protection, fertility, death, femininity, divination, friendship, joy, love, and peace. Placed in homes, Willow branches protect against evil and malign sorcery. Carried, Willow wood will give bravery, dexterity, and help one overcome the fear of death. If you knock on a Willow tree (knock on wood) this will avert evil. A Willow tree growing near a home will protect it from danger. Willows are also a good tree to plant around cemeteries and also for lining burial graves for its symbolism of death and protection.

Willows can be used in rituals for intuition, knowledge, gentle nurturing, and will elucidate the feminine qualities of both men and women. If a person needs to get something off their chest or to share a secret, if they confess to a Willow, their secret will be trapped. Also, wishes are granted by a Willow tree if they are asked for in the correct manner.

Willow leaves, bark and wood add energy to healing magic, and burning a mix of Willow bark and sandalwood during the waning moon can help to conjure spirits. Uses of Willow in love talismans include using the leaves to attract love.
Posted by SilentOwl at 11:50 AM

Email ThisBlogThis!Share to TwitterShare to FacebookShare to Pinterest
Labels: folkore of the Hedgerow