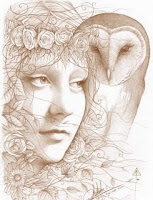 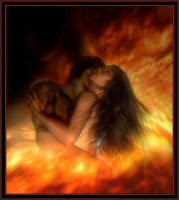 To the Celts, time was circular rather than linear. This is reflected in their commencing each day, and each festival, at dusk rather than dawn, a custom comparable with that of the Jewish Sabbath. Bealtaine is celebrated around 1st May and is sacred to the god Belanus (the shining one). The word derives from Beltinne or Fires of Bel. Bealtaine is a time of fertility when the cattle are set free from their winter quarters and driven between the cleansing fires, a time of feasting, fairs, and mating of livestock.

Foods eaten at the Bealtaine feast may include honey products, mead, fruit, fish, and milk products.

It has been suggested that the sacred fires of Bealtaine were actually a form of sympathetic magic that encouraged the sun to cast its warmth upon the earth.
Bealtaine and its opposite Samhain, divide the year into two seasons, the dark winter and the bright summer and as Samhain honours the dead so Bealtaine as its opposite honours life. The sun reigns over the moon and now begins a time of magic and divination.

Bealtaine is the time when people get up early (at dawn) and gather branches and flowers to decorate their homes. Leaves of the rowan along with primroses and buttercups were hung over the door and placed on the window sills and the colour green would be worn to honour Mother Nature.

The sacred fire would be lit by the druids on the Hill of Uisneach. This had the power to heal and purify and its light would stretch out across the land for all to see. It celebrates the burning away of winter and the return of life to the earth. It was said that cinders and torches would transfer some of the sacred fire to every hearth in the land so that each and every person could share in its power.

There are many superstitions concerning this time and it is the one day of the year when you give nothing away even if a stranger called at your door looking for a light or a bit of butter they would be turned away.

Dependent on which part of the country you were in, the customs were observed, on May Day you should not dig, whitewash, bathe in the sea or take out a boat. At this time the gentry were on the move and no one should upset them. It was also believed that on this day you must not venture out but if you had to go out for some reason then you should carry a piece of iron in your pocket for protection against the faeries (the gentry) if you had no iron then a sprig of rowan would do just as well. People would also leave a gift of food or drink for the faeries on the doorstep or under a hawthorn tree. The first water taken from the well on this day was known to be full of luck and healing but in the wrong hands it could be used for doing harm. It was also believed that a child born on May Day had the gift of second sight but they would only have a short life.

This was also the time of year when tenants had to go up to the big house to pay the half-year rent.

Weather watching was an important pastime and the appearance of the sky, the moon, the strength and direction of the wind, the amount of rainfall were all indications of the coming summer. If it was wet and windy then that was a good sign as it was an omen of good harvests to come. A cold, east wind was a bad sign and frost was an indicator of hard times ahead. Snow was such a bad omen that the farmers expected the landlord to forego the rent for the next half year (fat chance of that).

Family health was important at this time as it was believed that any injury sustained at this time would be very difficult to cure and may be a long time healing. However, this was also considered the best time to gather medicinal herbs and replenishing the medicine chest. Also the first butter made from the milk gathered on May Day would make a powerful ointment.

Bealtaine was a time of unabashed sexuality and promiscuity where marriages of a year and a day could be undertaken but it is rarely observed in that manner in modern times.

In the old Celtic times, young people would spend the entire night in the woods "A-Maying," and then dance around the phallic Maypole the next morning.

Older married couples were allowed to remove their wedding rings (and the restrictions they imply) for this one night. There is absolutely no way you would get away with using that as an excuse today so if any of you are thinking about it. Forget it.

Below is an extract from a poem by Kipling that tells of that night.

Oh, do not tell the Priest our plight,
Or he would call it a sin;
But - we have been out in the woods all night,
A-conjuring Summer in!
And we bring you news by word of mouth-
Good news for cattle and corn-
Now is the Sun come up from the South,
With Oak, and Ash, and Thorn!

Extract from A Tree Song by Rudyard Kipling.

Top image courtesy of Fine Art America
Posted by SilentOwl at 8:51 AM