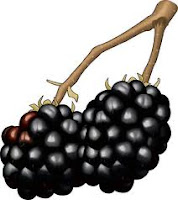 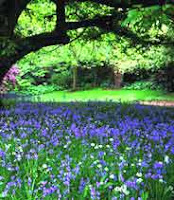 Some of the plants you will find in an Irish hedgerow include:

Believed to call the fairies when rung, and thought to be unlucky to walk through a mass of bluebells, because it was full of spells. It is also considered an unlucky flower to pick or bring into the house. The Latin name for this flower is Endymion who was the lover of the moon Goddess, Selene. The goddess put Endymion into an eternal sleep, so she alone could enjoy his beauty.

Bluebells were said by herbalists to help prevent nightmares, and used as a remedy against leprosy, spider-bites and tuberculosis, but the bluebell is poisonous.

Noted for the gummy sap from its bulbs, which made it useful as a starch substitute. It was also used as glue for bookbinding (as it is so toxic it stops certain insects from attacking the binding) and setting the tail feathers on arrows.

The bulbs are extremely toxic and this toxicity may be the origin of the superstitious belief that anyone who wanders into a ring of bluebells will fall under fairy enchantment and soon after die. Other tales come from a time when forests where forbidding places, people believed that the bells rang out to summon fairies to their gatherings, unfortunately any human who heard a bluebell ring would soon die.

However, not all the Bluebell’s folklore is quite so gloomy. Some believed that by wearing a wreath made of the flowers, the wearer would be compelled to speak only truth. Others believed that if you could turn one of the flowers inside out without tearing it, you would eventually win the one you love.

Where Bluebells are found in hedgerows it may indicate an ancient hedge as their presence is indicative of ancient woodland.

The name derives from the shape of the flowers resembling the fingers of a glove - 'folk’s glove' meaning belonging to the fairy folk. Folklore tells that bad fairies gave the flowers to the fox to put on his feet to soften his steps whilst hunting.

The whole foxglove plant is extremely poisonous, but provides a source of digitalis used by doctors in heart medicine. The foxglove was believed to keep evil at bay if grown in the garden, but it was considered unlucky to bring the blooms inside. The commonest colour for the foxglove is pink, but you often see white blooms in the hedgerows.

In Irish folklore it was said that if a child was wasting away then it was under the influence of the fairies (fairy stroke) and foxglove was given to counteract this (it was known to revive people). One such remedy was the juice of twelve leaves taken daily. It could also work for adults, such a person would be given a drink made from the leaves, if they were not too far gone they would drink it and get sick but then recover. However, if they were completely under the spell of the faeries then they would refuse to drink.

An amulet of foxglove could also cure the urge to keep travelling that resulted when you stepped onto the fairy grass, the’ stray sod’ or fód seachrán. In Ireland it is believed that the foxglove will nod its head if one of the ‘gentry’ passes by.

Not to be eaten after Samhain because the Púca spits on them and they become inedible (in some parts of Ireland they believe that the Púca urinates on them).

An arch of bramble which had rooted at both ends was believed to have special powers and if you wished to invoke evil spirits you could do so by crawling through the arch at Samhain while making your wish. An arch of bramble could also be used to cure, for example, a child with whooping cough could be cured by passing it under the arch three times before breakfast for nine consecutive days while saying “in bramble, out cough, here I leave the whooping cough".

In Ireland if you found a piece of bramble attached to a cows tail at Bealtaine it was considered suspicious as it meant someone was trying to put a spell on the milk.

Bramble was classed as one of the bushes of the wood in the Old Irish Brehon Laws on trees and shrubs and you could be fined for cutting it.

Blackberries were traditionally eaten mashed up with oatmeal to make a tasty porridge and for making jam. The roots were used to make an orange dye; In Ireland the root of the bramble was used to make the core for hurling balls and for pipes and the long shoots were used for wickerwork and even for securing thatch.

Medical uses include using the leaves in a cure for diarrhoea in both cattle and people; it could cure dropsy and was considered to have fantastic curative powers for coughs and colds. It was also used for a variety of skin complaints such as scalds, burns, boils, shingles and spots.
Posted by SilentOwl at 5:09 AM