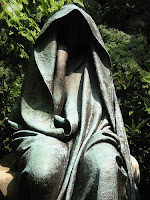 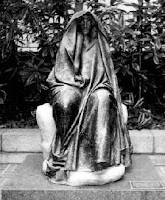 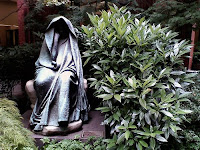 I thought that this little story might entertain you. Enjoy. I will return to Folklore of the Hedgerow on the next post.

When Felix Agnus put up the life-sized shrouded bronze statue of a grieving angel, seated on a pedestal, in the Agnus family plot in the Druid Ridge Cemetery, he had no idea what he had started. The statue was a rather eerie figure by day, frozen in a moment of grief and terrible pain. At night, the figure was almost unbelievably creepy; the shroud over its head obscuring the face until you were up close to it. There was a living air about the grieving angel, as if its arms could really reach out and grab you if you weren’t careful.

It didn’t take long for rumours to sweep through the town and surrounding countryside. They said that the statue – nicknamed Black Aggie – was haunted by the spirit of a mistreated wife who lay beneath her feet. The statue’s eyes would glow red at the stroke of midnight, and any living person who returned the statues gaze would instantly be struck blind. Any pregnant woman who passed through her shadow would miscarry. If you sat on her lap at night, the statue would come to life and crush you to death in her dark embrace. If you spoke Black Aggie’s name three times at midnight in front of a dark mirror, the evil angel would appear and pull you down to hell. They also said that spirits of the dead would rise from their graves on dark nights to gather around the statue at night.

People began visiting the cemetery just to see the statue, and it was then that a secret society decided to make the statue of Grief part of their initiation rites. “Black Aggie” sitting, where candidates for membership had to spend the night crouched beneath the statue with their backs to the grave of General Agnus, became very popular.

One dark night, two society members accompanied a new hopeful to the cemetery and watched while he took his place underneath the creepy statue. The clouds had obscured the moon that night, and the whole area surrounding the dark statue was filled with a sense of anger and malice. It felt as if a storm were brewing in that part of the cemetery, and they noticed that gray shadows seemed to be clustering around the body of the frightened society candidate crouching in front of the statue.

What had been a funny initiation rite suddenly took on an air of danger.

One of the society brothers stepped forward in alarm to call out to the initiate. As he did, the statue above the boy stirred ominously. The two society brothers froze in shock as the shrouded head turned toward the new candidate. They saw the gleam of glowing red eyes beneath the concealing hood as the statue’s arms reached out toward the cowering boy.

With shouts of alarm, the society brothers leapt forward to rescue the new initiate. But it was too late. The initiate gave one horrified yell, and then his body disappeared into the embrace of the dark angel. The society brothers skidded to a halt as the statue thoughtfully rested its glowing eyes upon them. With gasps of terror, the boys fled from the cemetery before the statue could grab them too.

Hearing the screams, a night watchman hurried to the Agnus plot. He was extremely distressed to discover the body of a young man lying at the foot of the statue. The young man had apparently died of fright.

The disruption caused by the statue grew so acute that the Agnus family finally donated it to the Smithsonian museum in Washington D.C.. The grieving angel sat for many years in storage there, never again to plague the citizens visiting the Druid Hill Park Cemetery.

Is it true? I will leave it up to you to decide.
Posted by SilentOwl at 2:21 PM