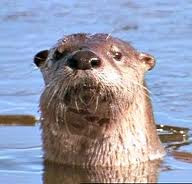 The otter lives along riverbanks and beside lakes all around Ireland. It is very good at swimming and diving. The otter has a small-flattened head, a long thick neck and a thick tail that narrows to a point. It can be 3 feet in length, which is about a metre and when they are fully grown up they can weigh about 20 lbs. It has a long body covered with fur. It belongs to the same family as the stoat, pine marten and badger. The otter looks like a seal. The otter is a carnivore, which means that he usually eats meat and often eats shellfish. To get at the shellfish,the otter bangs it against a stone. This way he can get at the food inside. The otter is found in many parts of Ireland. Otters are very playful animals. It has a grey to brown thick coat of fur, which helps it swim well in water. They are often seen jumping in and out of water just for fun,

In Irish folklore, the Dobhar-chu (say durra-ghoo) is the king of all otters, the seventh cub of an ordinary otter. It is said to be much larger than a normal otter, and it never sleeps. The king of all otters is so magical that an inch of its fur will protect a man from being killed by gunshot, stop a boat from sinking or stop a horse from being injured.

The Dobhar-chu is also often said to be accompanied by a court of ordinary otters. When captured, these beasts would grant any wish in exchange for their freedom. Their skins were also prized for their ability to render a warrior invincible, and were thought to provide protection against drowning. Luckily, the Otter Kings were hard to kill, their only vulnerable point being a small point below their chin,(first you had to get past those sharp teeth). There are also traditions of the "King Otter", who is dangerous, and will devour any animal or beast that comes in its way. This otter is sometimes described as white with black rimmed ears and a black cross on his back, and sometimes as pure black with a spot of white on his belly. He could only be killed by a silver bullet and the person who killed him would die within 24 hours.

It was believed that if you were bitten by an otter then the only cure was to kill and eat another otter.

The otter is protected under Irish law and it is a criminal offense to kill one.

The otter is a loyal mate and a good parent who will after its cubs for longer than most other animals and for this reason is a symbol of a strong family.

The otter is sacred to the Irish sea god Manannan Mac Lir and the goddess Ceridwen.
Irish harps used to be carried in bags made from otter skin as it protected them from getting wet.

A warrior’s shield would be covered in otter skin (lining the inside) and in this way they protected the warrior in battle.

It was believed that the magical power of the otter’s skin could be used for healing. It was used to cure fever, smallpox and as an aid in childbirth.

If a person licked the still warm liver of a dead otter they would receive the power to heal burns or scalds by licking them.

by Michael Hartnett - translated from the Irish by the Author
From 20th Century Irish poems selected by Michael Longley. Published by Faber and Faber.

A wounded otter on a bare rock a bolt in her side,
stroking her whiskers stroking her feet.
Her ancestors told her once that there was river,
a crystal river, a waterless bed.

They also said there were trout there
fat as tree-trunks and kingfishers
bright as blue spears -
men without cinders in their boots,
men without dogs on leashes.

She did not notice the world die nor the sun expire,
She was already swimming at ease in the magic crystal river.

One of his country's best-loved poets, Irish born Michael Hartnett, died in October '99 in Ireland. He was 58 years old.
Posted by SilentOwl at 1:36 PM