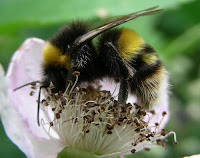 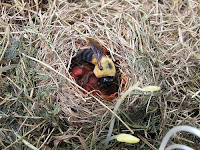 Buff-Tailed Bumblebee nests can be found in the hedgerows. The bees may be seen coming and going through a hole in the ground. The nest will be hard to see as bees are very private individuals but if you listen carefully you may hear them buzzing away quite happily. Sometimes the Queen may decide to occupy an old abandoned mouse nest as these are usually warm and well insulated. She may also nest underneath sheds, decking, in compost bags, in hedge clippings or even in attics or under floor boards. You could move a nest if it was causing you problems but it may not fully recover therefore leave it alone if it is doing you no harm. Like all bumblebees, they need to be greatly provoked before they sting.

As bees are becoming victim to an ever changing world that threatens their habitat you can do your bit to help them survive. Plant suitable flowers in your garden, window boxes, containers or even along the hedgerow. Provide a nest box, these are now becoming increasingly available in any good garden centre or make your own, they are very easy and you can Google plans. Remember they are a gardener’s friend and we need bees to pollinate our plants.

There is a superstition that if a bumblebee buzzes at the window it is a sign of a coming visitor.
A servant girl was standing at the kitchen window, in flew a bumblebee ‘Oh!’ she said, ‘a visitor is coming! Has the bee got a red tail or white? Red for a man and white for a lady’.

Irish folklore tells us how easily the bees take offence and this will cause them to cease producing honey, desert their hives and die. You must treat them as you would a member of your own family. They must be told all the news, in particular births, deaths and marriages. In the event of a death their hive must be adorned with a black cloth or ribbon and they must be given their share of the funeral food. You may then hear them gently hum in contentment and they will stay with you.

Other beliefs were that if the bees heard you quarrelling or swearing they would leave so you must talk to them in a gentle manner. They cannot tolerate the presence of a woman of loose morals or one that was menstruating but would sting her and drive her away (sounds like Christian influence here). You must never buy bees with normal money, only with gold coin although you may obtain them through gift, loan or barter. It was also believed that if a single bee entered your house it was a sign of good luck on the way, usually in the form of wealth.

When bees swarmed, it was the women and children of the household that had to follow them, making a noise with pots and pans. This was supposed to make them settle or maybe it was really just to warn people to get out of the way? It was accepted that in these circumstances you could follow them onto someone else’s land without being accused of trespassing.

The law on bees (Brehon Law) was that bees taking nectar from plants growing on your neighbours land were guilty of 'grazing trespass' in the same way a cow or sheep would be if they were on your neighbours land. They could even be accused of 'leaping trespass' in the same way as poultry. The way this law was observed was that a beekeeper was allowed three years of freedom during which time the bees were allowed free reign, on the fourth year the first swarm to issue from the hive had to be given to your neighbour as payment. On the following years other swarms were given in turn to other neighbours, in this way everyone was happy. From all accounts it seemed to work. Another issue the Bechbretha (Law governing bees) was enacted was in the event of stings. As long as you swore you had not retaliated by killing the bee you would be entitled to a meal of honey from the bee keeper. However if the unfortunate person died from a sting then two hives had to be paid in compensation to their family.

It was a bad omen if a swarm settled on a dead branch for it meant death for someone in the bee keeper’s family or for the person who witnessed the swarm settling. Popular folklore also suggested that bee stings aide in the relief of arthritis and rheumatism in much the same way as nettle stings and recently bee venom has been revived as a possible treatment for multiple sclerosis.

In Celtic myth, bees were regarded as beings of great wisdom and as spirit messengers between worlds. Honey was treated as a magical substance and used in many rituals. It was made into mead and was considered to have prophetic powers and it may have been this that was called ‘nectar of the gods’. The rivers that lead to the summer lands are said to be rivers of mead.

“Telling the Bees” was extremely important, whether good news or bad or just everyday gossip. As stated earlier you had to tell the bees about a death in the family or the bees would die too. Bad news was given before sunrise of the following day for all to be well. You may even formally invite the bees to attend the funeral or you could turn the beehives round as the coffin was carried out of the house and past the hives. In ancient European folklore, bees were regarded as messengers of the gods and so the custom of “Telling the Bees” may be a throwback to the idea of keeping the gods informed of human affairs.

Trembling, I listened: The summer sun
Had the chill of snow;
For I knew she was telling the bees of one
Gone on the journey we must all go!
And the song she was singing ever since
In my ear sounds on:
‘Stay at home, pretty bees, fly not hence!
Mistress Mary is dead and gone!
Extract from “Telling the Bees” by John Greenleaf Whittier.
Posted by SilentOwl at 11:16 AM