Folklore of the Hedgerow. Part Seventeen. 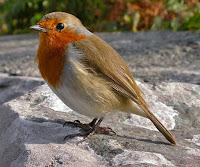 Folklore of the Hedgerow. Part Seventeen.

If you harm a robin's nest, you will be struck by lightning. There is also an old saying "Kill a robin or a wren, never prosper, boy or man." A robin entering the house foretells of a death to come. If a robin stays close to the house in autumn, a harsh winter can be expected. Robins are thought to be helpful to humans, occasionally granting favours. Robins are a sure sign of spring and if you make a wish on the first robin of spring before it flies off,
you'll have luck throughout the following year.

Robins with their cheery red breasts adorn many of our Christmas cards and decorations, and there are several stories as to how the robin acquired its red breast feathers. In the Christian tradition, it is thought that a robin tried to remove the thorns from Jesus’ head during the Crucifixion, and that drops of his blood fell onto the bird and stained his breast feathers red forever. In another myth, the robin gained his red breast from flying into the fiery wastes of hell to carry water to the stricken sinners who were suffering there for all eternity. It’s enough to give you nightmares.

The robin is another bird where it is believed that if they are seen tapping on the window or flying into a room that a member of the household will soon be dead. However, we often have Robins flying into our cottage and we look on them as our friends not as harbingers of death.

If you break a robin’s eggs expect something important of yours to be broken very soon.

Note that if you see a robin singing in the open that good weather is on its way, but that if the robin is seen sheltering among the branches of a tree that it will soon rain. Also, if the first bird that you see on St Valentine’s Day is a robin, it means that you are destined to marry a sailor!

It is said to be extremely unlucky to kill this bird. The hand that does so will continue to shake thereafter. Traditionally the Irish believe that a large lump will appear on the right hand if you kill one. It is said that whatever you do to a robin you will suffer the same tragedy. Some believe that the robin will not be chased by a cat.

It was widely believed that if a robin came across a dead body it would carefully cover the body with leaves and vegetation until it was completely hidden.
Robins were believed to provide a cure for depression. The remedy suggests a robin must be killed and its heart removed. The heart should then be stitched into a sachet and worn around the neck on a cord. I think that would give me depression.

In the south east of Ireland they believed that if a robin entered a house it was a sign of snow or frost.

How Robin got his Red Breast.

One winter, a long time ago, Jack Frost was very cruel. He made the snow fall thickly upon the ground, and he put ice on the ponds and frost on the window panes.

The birds found it very hard to get food and soon they began to get hungry.

Then, one day, the birds were sitting in a ring under a hedge, trying to think what was to be done. After a while a little brown, bird, called Robin, got up to speak.

"I have an idea," he said. "I will go into the gardens and try to get people to give us a lot more crumbs!"

Now Robin had a way all of his own of making friends. He went along to the houses where people lived and in one of the gardens he saw a man clearing away the snow from a path, so he hopped up very close to the man. Most birds are very much afraid of men, but Robin was brave. He had to be, if he was to help the other birds. When the man saw how friendly Robin was, and how hungry he seemed to be, he went into his house and fetched a tray full of crumbs.

Robin was glad, and he flew off to fetch the other birds, and soon there were crowds of them in the kind man's garden.

The best way they could say "Thank you" to the kind man was to eat the crumbs out of his hand. Robin then flew away into other gardens, and wherever he went he made friends. So, while the snow stayed on the ground the birds were able to feed after all. At last Jack Frost sent the snow away, and then the happy birds wanted to thank Robin so they made him a little red waistcoat, which he still wears.

That is why he is now called Robin Redbreast.

Many years ago, late in the year, a cruel wind brought biting cold weather; making the night more difficult for a father and son who had travelled so far and yet still had a long way to go. They looked for a cottage, a barn, or even a tree - anywhere they could find shelter. However, there was nothing to be seen or found, except for an old bush, so at last the father built a fire and told his son to try and sleep a little.

When the father's eyes began to droop he woke his son and told him to watch the fire.

Well the boy tried to stay awake! He hadn't really slept while lying on the frozen ground and he was still exhausted from the walk. His eyes got lower. His head got lower. The fire got lower.

So low in fact that a starving wolf began to inch nearer the sleeping pair.
However, there was one who was awake. There was one who saw everything from the middle of the old bush; a little bird who was as grey as the brambly wood.

The heat from the flames caused his breast feathers to change colour and from that day on the Robin has proudly worn a red breast.

Robins feature in ‘Babes in the Woods’ when the little bird buried the children, who had died of cold, with leaves. The ballad ‘Who Killed Cock Robin’ was first published in 1744 and Drayton in 1604 referred to the robin in his work entitled ‘The Owlet’. In fact there are many writers who have been inspired by the dear old robin.

Associated with the druids of Ireland who consider the wren a sacred bird and used their musical notes for divination. They were called magus avium (the magic or druid bird).

This poor unfortunate bird was for many years hunted and killed although today it is respected. The main day for hunting was December 26 when the cruel practice was carried out by young boys (Wren boys). The Wren boys would receive money as they paraded the dead birds from house to house.

The wren was seen as a sacred bird to the early Druids and therefore was the target by Christian believers as Pagan purges were frequent and all-embracing. This unfortunate set of circumstances may also have come about as the feathers were thought to prevent a person from drowning, and because of this the feathers were traditionally very popular with sailors.

A traditional French belief tells that children should not touch the nest of a wren or the child will suffer from pimples. In the same way as a robin is revered, if anyone harms the bird then the person will suffer the same fate.

The Breton druids have given the wren an honoured role in their folklore, they believe that it was the wren that brought fire from the gods but as she flew back down to earth her wings began to burn so she passed her gift to the robin, whose chest plumage began to burst into flames. The lark came to the rescue, finally bringing the gift of fire to the world.

During the winter wren’s lose their body heat rapidly and therefore will often roost together to keep warm. Remember an odd nest box left up occasionally during the winter months will often be used for roosting. It is not unusual for several wrens to cuddle up together in one box during cold times. The male bird builds two or three ball-shaped nests for the female to inspect. She decides which one she likes best and will then proceed to line the chosen nest ready for egg laying.

The wren is a mouse-like little bird for it scurries here and there hiding in ivy leaves and picking up insects in all sorts of hideaway places.

Wordsworth writes about the wren’s song in Book II of The Prelude. Whilst most people find the wrens song a little harsh, he favoured its song and celebrates it in his writing. Good old Wordsworth!

An earlier post called 'WHY THE WREN FLIES CLOSE TO THE EARTH’ tells the story of why the wren was known as The King of the Birds, why not have a look.