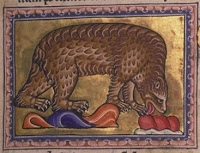 Art, In Ireland a separate name from Arthur it comes from an ancient word for "a bear," used in the sense of "outstanding warrior" or "champion." A pagan High King of Ireland, Art's rule was so honest that two angels hovered over him in battle.

Bear folklore is widespread, especially in the far northern hemisphere. It is not surprising that this awesome beast was one of the first animals to be revered by our ancestors. From as far back as the Palaeolithic (around 50,000 years ago) there is evidence of a bear cult in which the bear was seen as lord of the animals, a god, and even the ancestor of humans. Various species of bear played a central role in many shamanic practices of the north, and brown bears were part of our native forests as recently as the 10th century, when hunting and habitat loss drove them to extinction.

The Celts venerated the bear goddess, Artio - like a mother bear she was a fiercely protective influence. The bear god Artaois is closely linked to the warrior-king, Arthur; with his legendary strength and fighting prowess, Arthur's name and emblem both represent this animal. Celtic families would often have their own animal totem, a tradition that is still evident in the family name McMahon, which means 'son of the bear'.

Viking warriors were famous for working themselves into an insane battle frenzy (it has been suggested that the psychotropic fly agaric mushroom was sometimes used, see one of my earlier posts). They invoked the bear spirit, at times even donning a bear skin, to imbue them with superhuman strength and fury. These were the Berserkers, their name being derived from a Norse word meaning 'bear shirt'.

Perhaps the most wonderful characteristic of bears is their ability to hibernate and then emerge at the end of winter, which suggests death and resurrection. In part because bears give birth during hibernation, they have been associated with mother goddesses. The descent into caverns suggests an intimacy with the earth and with vegetation, and bears are reputed to have special knowledge of herbs

In Celtic mythology, Andarta was a warrior goddess worshipped in southern Gaul. Inscriptions to her have been found in Bern, Switzerland as well as in southern France. Like the similar goddess Artio, she was associated with the bear. .

In Irish and Scottish mythology, Cailleach (also called Cailleach Beara or Cailleach Behr) was the "Mother of All". The word Cailleach means "old woman". She was a sorceress. In addition to the Celts, the Picts also worshipped her. In art, she was depicted as a wizened crone with bear teeth and a boar's tusks. Each year, the first farmer to finish his harvest made a corn dolly representing Cailleach from part of his crop. He would give it to the next farmer to finish his harvest, and so on. The last farmer had the responsibility to take care of the corn dolly, representing Cailleach, until the next year's harvest.

In Scotland, she is Cailleach Behr, The Blue Hag of Winter, an Underworld goddess and a faery spirit. She appears as an old woman in black rags carrying a staff, who travels about at night with a crow on her left shoulder. She has a bad temper and is dangerous to people. She has fangs and sometimes three faces. She could turn herself into a cat. One legend describes her as turning to stone on Bealtaine and reverting back on Samhain to rule as Queen of Winter. In another, she spent the autumn washing her plaid in her washtub, the whirlpool of Corryvreckan. By winter this was white, and became the white blanket of snow that falls over Scotland in January.

Bears are no longer found in Ireland (since the end of the eleventh century) or Scotland, they became extinct in the late Middle Ages. Bear amulets made of jet have been found in North Britain. Many times these were placed in the cribs of new-born babies so they would be under the protection of the Great Mother Bear. The Bear's strength and power made them a powerful totem symbol for the ancient Celts, and Bear's teeth were considered powerful amulets. Some Celtic sites had votive statues and ritual jewellery dedicated to the Bear.

The Celts had two goddesses that took the form of the Bear: Andarta ("powerful bear") and Artio. The Celtic god, Cernunnos is often depicted as being accompanied by a bear and other animals. The Druids called upon the blessings of the Great Bear, which is associated with the North. The reverence for Bears began to wain with the coming of Christianity, and was perverted into bear-baiting.

Phrases such as "licking a child into shape" comes from the belief that newborn bear cubs were small and fragile and their mother licked them into health and shape. The Bear Paw is also thought to secrete a substance that kept the bear through long winter hibernations.

Medieval "mummers" play the Bear as a villain, having him terrorize flocks of sheep. Bears have always been admired for their great strength, and their knowledge. Bears will stay away from trouble with humans if possible, but when cornered, they will fight bravely.

In medieval times, it was believed that a Bear's eye in a beehive would make the bees prosper and make more honey. Bears love honey, and often will brave the anger of the hive for a taste of their favourite nectar.

A child riding on the back of a Bear was thought to cure whooping cough.
Bears roamed Ireland thousands of years ago; a time when the entire island was almost totally forested. The Irish bear – the brown bear – was of the same species as the North American grizzly, and as such could reach heights of over eight feet when standing on hind legs. Bones were found in Glenade, in County Leitrim, in 1997 and at 3,000 years old are thought to be of the last bears to have lived in Ireland. The finding shows that bears lived on the island at the same time as humans; perhaps hunting and loss of habitat leading to their extinction.
Posted by SilentOwl at 2:38 AM