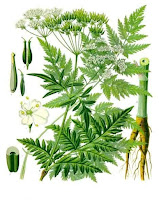 'Neath billowing skies that scatter and amass.
All round our nest, far as the eye can pass,
Are golden kingcup-fields with silver edge
where the cow-parsley skirts the hawthorn-hedge.
'Tis visible silence, still as the hour-glass.

Also known as Devil's Parsley, possibly because of its resemblance to the highly poisonous Hemlock, this plant occurs in accounts of witchcraft practices. It is a native plant belonging to the Apiaceae family.

The name Queen Anne's lace: from time when Queen Anne travelled the country side in May, around Kensington in England, as she suffered from asthma, & came to get fresh air. The roadsides were said to have been decorated for her by this plant. As she & the ladies in waiting walked, they carried lace pillows; the Cow Parsley resembled the lace.

The origin of the name Mothers Dies seems to be a folk tale that children were told that if they picked cow parsley, their mother would die. This threat would deter children who couldn't tell the difference from picking hemlock which is poisonous.
The Celts used to include Cow Parsley in their diet according to archaeologists who analysed the stomach contents of a Celtic man discovered in a peat bog in Cheshire. They also found Emmer and Spelt wheat, Barley, fat hen and dock.

While some claim that the root of the wild plant is also edible, it is not advisable to eat any part of this plant unless it has been expertly identified. There are several plants that look the same as Cow Parsley and are extremely poisonous and potentially fatal if ingested. DO NOT EAT THIS PLANT Remember Cow parsley can be easily confused with Hemlock.

Cow parsley is said to get rid of stones and gravel in the gall bladder and kidneys but very little research has been done on the common plant. It has been used by amateur dyers as a beautiful green dye; however, it is not permanent. The most common use for the stalks is for pea-shooters as the stems are hollow, so children love them. The foliage used to be sold by florists in Victorian times and used in flower arrangements.

Like sweet woodruff, cow parsley has the reputation of “breaking your mother’s heart”. This is said to have come about because the tiny white blossoms drop quickly. In the days before vacuum cleaners, the temptation for mothers to ban these work-generating posies from the house was understandable. This may be where the superstition came from describing Cow Parsley as ‘unlucky indoors’ and a ‘harbinger of death’.

The cultivated relative of Cow Parsley, Chervil, is a well known herb which when made into an infusion can be used in the treatment of water retention, stomach upsets and skin problems. It can be used to promote wound healing. Chervil water is used as a constituent of gripe water. Cow Parsley may be used as a natural mosquito repellent when applied to the skin.

In our folklore there are many uses for Nettle.

'To cure a sting of a nettle, place a dock leaf over sore part for a few minutes and it will be well'

'The water of boiled nettles if drank will cure anyone suffering from worms'
'Cure for dropsy.

'For rheumatics a bed strewn with nettles'

All the above are from the National Folklore Collection, University College Dublin.

17th century herbalist and apothecary, Nicholas Culpeper is reputed to have said:
'Nettles may be found by feeling for them in the darkest night'.

They are recognised as being a rich source of vitamin C and contain more iron than spinach. Indeed they make a very tasty soup but it is essential to pick them where no chemicals or pollution may have affected them and to use only the upper leaves as the lower leaves may contain irritants. Nettles also contain anti-histamines which are helpful to those with allergies and serotonin which is reputed to aid one's feeling of 'well-being'.

Arthritic joints were sometimes treated by whipping the joint with a branch of stinging nettles. The theory was that it stimulated the adrenals and thus reduced swelling and pain in the joint.

Nettles are reputed to enhance fertility in men, and fever could be dispelled by plucking a nettle up by its roots while reciting the names of the sick man and his family.

Turkey and other poultry (as well as cows and pigs) are said to thrive on nettles, and ground dried nettle in chicken feed will increase egg production.

Nettles left to rot down in water make a fantastic liquid fertiliser.

Nettle can alter the menstrual cycle and may contribute to miscarriage, pregnant women should not use nettle.

Stinging nettle may affect the blood's ability to clot, and could interfere with blood-thinning drugs.

Stinging nettle can act as a diuretic, so it can increase the effects of certain drugs, raising the risk of dehydration.

Stinging nettle may lower blood sugar, so it could make the effects of certain drugs stronger, raising the risk of hypoglycaemia (low blood sugar). Diabetics beware.

The Nettle is significant among plants used for medicine by the Celts in that it was probably one of the most widely used due to its ability to prevent haemorrhaging and stop bleeding from wounds. They would have used it to treat the wounds their warriors received in battle.

Recently it has been found that lectin found in Nettles is useful in treating Prostate enlargement and is widely prescribed for this in our times.

Nettles also have a place in ancient Celtic folklore and were also known as "Devil's Claw".

Nettles were believed to indicate the living place of fairies, and their stings protected one from witchcraft or sorcery.

'Guard the house with a string of primroses on the first three days of May. The fairies are said not to be able to pass over or under this string.'
From the National Folklore Collection, University College Dublin. NFC S.455:237. From Co Kerry.

The symbol of safety and protection, in ancient times it was placed on the doorstep to encourage the fairy folk to bless the house and anyone living in it, and it was also said that if you ate the blooms of the primrose you would see a fairy.  Both the cowslip and the primrose were thought to hold the keys to heaven and so were considered to be very sacred by the Celtic people.

It was the flower of Love and bringer of good luck, and was the symbol of the first day of spring and so was laid across thresholds to welcome ''May Day''.  Also considered to be a bringer of great inspiration for poets, the flower of youth, birth, sweetness and tenderness.

Insects, in particular ants, play an important role in pollinating these flowers. Nectar is located at the bottom of the flower tube and the long thin body of the ant is perfectly designed to carry and deliver pollen from other primrose plants. The primrose family is also remarkable for the number of hybrids it produces.

The primrose has many medicinal uses and was important in the past as a remedy for muscular rheumatism, paralysis and gout. The leaves and flowers can be used either fresh or dried; the roots should be dried before use. Culpepper was aware of the healing properties of the Primrose and said, “Of the leaves of Primrose is made as fine a salve to heal wounds as any I know.”

The Primrose was highly-prized by the Celtic Druids and its abundance in woods, hedgerows and pastures made it an easily-collectible plant. Primroses were often carried by the Druids during certain celtic rituals as a protection from evil. The fragrant oil of the flower was also used by the Druids to anoint their bodies prior to specific rites in order that they might be cleansed and purified.

Primroses are loved by the faeries so if you grow them don’t let them die for if you do you will greatly offend the faeries and who knows what will happen.

Primroses were very important in the rural area especially during the butter making season that began in May. In order to encourage cows to produce a lot of milk, primroses were rubbed on their udders at Bealtaine. Primroses would also be scattered on the doorstep to protect the butter from the faeries.

Primroses were also associated with chickens and egg laying and it was considered unlucky to bring primroses indoors if the hens were hatching in the coop dresser.

It was said that primroses bloomed in Tír na nóg and that people returning from there always brought a bunch with them as proof that they had been there.

In Irish folklore it was believed that rubbing a toothache with a primrose leaf for two minutes would relieve the pain. It was also used as a cure for jaundice (yellow flower).

The flower was often used in medicine throughout the ages as it has similar properties to aspirin, it has always been known as a ''healing'' plant, and so was often used extensively  in foods. Even today it is known for its healing properties and is used as a healing tea, while in the world of the flower essence, it is said to help heal those who have experienced the loss of a mother figure as a child.

In Ireland an ointment would be made from certain herbs including primrose and pigs lard and this would be used on burns.

DO NOT PICK AND USE HERBS UNLESS YOU KNOW EXACTLY WHAT YOU ARE DOING.
Posted by SilentOwl at 9:58 AM