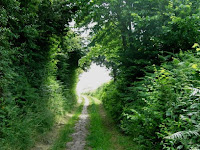 Some people thought that badgers could bring bad luck. This rhyme dates from about 200 years ago:

Should one hear a badger call,
And then an ullot cry,
Make thy peace with God, good soul,
for thou shall shortly die.

So, according to this bit of folklore, if you hear badgers call, then hear an "Ullot" (an owl) hoot, you are not long for this world.

Some people used to say that badgers had legs that were shorter on one side than the other. This was supposed to be because badgers often walked on sloping ground on the sides of hills.

Another 200-year-old story says that badgers - like black cats - can bring bad luck or good luck. If the badger walks across the path that you have just walked on, you are in for very good luck. However, if the badger walks across the path in front of you, and if it happens to scrape up a bit of earth as it goes, then it is time for you to choose your coffin! The old rhyme goes like this:

Should a badger cross the path
which thou hast taken, then
Good luck is thine, so it is said
beyond the luck of men.
But if it cross in front of thee,
beyond where thou shalt tread,
and if by chance doth turn the mould,
Thou art numbered with the dead.

The hair is used in the making of shaving brushes and also for artist’s brushes.
This animal is unyielding in the face of danger and is noted for its tenacity and courage.

The badger was an animal that was always favoured by the gambling fraternity.

If you wear a Badgers tooth around your neck you will be lucky in whatever you place wagers on especially cards.

Highlanders, on the other hand, had rather more regard for the badger, admiring its strength and tough hide. Badger faces were used to cover sporran’s, badger teeth employed as buttons, and even badger penises given as fertility charms to bridegrooms from brides' fathers.

Badger fat was used for cooking and also rubbing on the chest as a cure for rheumatism.

Henry Smith, author of 'The Master Book of Poultry and Game', which was published shortly after the end of World War Two, declares "the flesh can be treated as young pig in every respect, it being just as rich and having the flavour of a young pig".

In the middle of the 20th century they were thought to be the carrier of tuberculosis, which was subsequently transmitted to cattle. Their persecution was relentless and their numbers in Ireland dipped as a result. Protection was afforded to badgers in the 1970s and since then their numbers have started to recover.

Their home, referred to as a ‘set’, is a complicated tunnel construction where the female or ‘sow’ raises up to three cubs each year during February or March. A Badger set can be as much as twenty metres long and be several metres below the surface.

The Badger (Broc) connects to perseverance, along with the patience and persistence this requires. He is considered self-reliant, determined, assertive and willing to work, with an earthy wisdom. Brocan was a name for Pictish wise men.

That said, the Badger was not always treated with respect - the game 'Badger in the Bag' started, according to legend, with the celtic hero Pwyll tricking a rival into a bag and each of his men having a turn at kicking the supposed 'badger' he had trapped. Bagging badgers before dealing with them (or indeed baiting them) also has to do with their aggression and fighting skills.