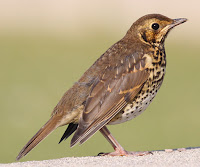 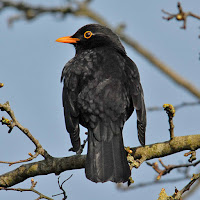 Place blackbird feathers under someone's pillow and they will tell you their innermost secrets. Blackbirds symbolize reincarnation. Blackbirds are linked to the element of Water.

Two blackbirds seen together mean good luck. The sight of two together is unusual as they are quite territorial. If they nest near your house you will be lucky throughout the year and will experience good fortune. They are also regarded as messengers of the dead.

Blackbirds make their nests in trees from moss, grass and hair. A European tradition says that if human hair is used, the unfortunate unknowing donor will continue to suffer from headaches and possibly even boils and skin complaints until the nest is destroyed, so old hair should be disposed of carefully.

The beautiful song of the blackbird makes it a symbol of temptations, especially sexual ones. The devil once took on the shape of a blackbird and flew into St Benedict's face, thereby causing him to be troubled by an intense desire for a beautiful girl he had once seen. In order to save himself, the saint tore off his clothes and jumped into a thorn bush. This painful act is said to have freed him from sexual temptations for the rest of his life. Now if you believe that you’ll believe anything.

Like the crow and the raven, the blackbird is often considered a bad omen. Dreaming of a blackbird may be a sign of misfortune for you in the coming weeks. It also means you lack motivation and that you are not utilising your full potential.

Dreaming of a flying blackbird is said to bring good fortune.

One story concerning the blackbird is about St.Kevin, an Irish 7th century Saint who loved wildlife. It is said that in the temple of the rock at Glendalough, St.Kevin was praying with his hand outstretched upwards when a blackbird flew down and laid her eggs in his palm. The story goes on to say that the saint remained still for as long as it took for the eggs to hatch and the brood to fly the nest.

Among the Celts the blackbird is thought to be one of the three oldest animals in the world. The other two being the trout and the stag. They are said to represent the water, air and earth.

Legend says that the birds of Rhiannon are three blackbirds, which sit and sing in the World Tree of the Otherworlds. Their singing puts the listener in to a sleep or trance which enables her/him to go to the Otherworlds. It was said to impart mystic secrets.
In Irela
nd in the nineteenth century, blackbirds were supposed to hold the souls of those in purgatory until judgement day. It was said that whenever the birds voices were particularly shrill, it was those souls, parched and burning, calling for rain. The rain always followed.

The whistle of the blackbird at dawn warned of rain and mist for the coming day.

Bottom in a Midsummer’s dream sings;
“The ouzel cock so black of hue
With orange tawny bill…” (Ouzel being an old name for blackbird.)

Known more popularly as the “Irish Nightingale,” the dunnock is the object of a most tender superstition. By day it is a happy little bird that tries to outdo every other bird with its song. However, at night particularly at midnight their sad and tender songs are said to reflect the cries of unbaptised babies that have returned from the spirit world in search of their parents.

The dunnock’s blue-green eggs were regarded as charms against witches spells when strung out along the hob. They were especially good for keeping witches and spirits from coming down the chimney.

It was in fact Linnaeus who gave the Dunnock the name Accentor which means ‘one who sings with another’. Chaucer made notes on how the cuckoo uses the dunnock to rear its young. Cuckoos which use dunnocks in this way can imitate the colour of the dunnock eggs whereas other cuckoos which may use another species of bird, say a meadow pipit, will imitate the colour of the meadow pipit eggs. Chaucer refers to the Dunnock as Hegesugge which means ‘flutterer in the hedges’. Hegesugge is the Old English name for Dunnock/Hedge Sparrow.

There are many superstitions associated with Song thrushes, including the notion that they dispose of their old legs and acquire new ones when they are about 10 years old. Another superstition is that they are believed to be deaf. All sorts of things have also been said and written about Mistle thrushes also. In the fourth century Aristotle was already writing about its fondness for mistletoe and there is an old belief that Mistle thrushes could speak seven languages!

It was believed that the flesh of the song thrush would cure sickness and convulsions.

That’s the wise thrush;
he sings each song
twice over,
Lest you think he
never could recapture
The first fine careless rapture!
Extract from Home-Thoughts, From Abroad by Robert Browning