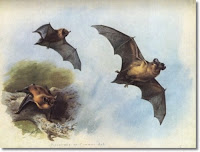 Feared as creatures of the night associated with death, sickness and witchcraft. Made famous as the familiars of vampires by the cinema.

They sleep hanging upside down by their feet. They live in shelters such as caves or hollow trees, but they also take advantage of human structures. Like most small animals that are drawn to human habitations, bats have often been identified in folk belief with the souls of the dead. As a result, in cultures that venerate ancestral spirits, bats are often considered sacred or beloved. When spirits are expected to pass on rather than return, bats appear as demons or, at best, souls unable to find peace.

In relation to bats the learned folklorist Joseph Jacobs said “He that is neither one thing nor the other has no friends”Revulsion against them, however, is far from universal, and their quizzical faces have often inspired affection. There were no glass windows in the ancient world, and so people had little choice but to share their homes with bats.

In Ireland if a bat was seen near the house it was taken as a sign of an impending death for a member of the household. However, we have bats in our roof space (they came in last winter). We are quite happy with them and they cause us no problems whatever.

A common bat seen in and around hedgerows at dusk is the Pipistrelle Bat. Their Irish name is Laltog Fheascrach which means 'bat of the evening'.

The earliest remains of wood mice in Ireland, date to the Stone Age, 7600 years ago. It is believed that more wood mice came to Ireland with humans at various times, giving a certain genetic variability. The wood mouse is a very important part of the Irish food web. Many Irish predators eat wood mice, including owls, kestrels, stoats, foxes, badgers, pine martens, and domestic cats. Wood mice are susceptible to pesticides, insecticides, and herbicides, and to the burning of straw. A decline in wood mice numbers can effect predator numbers, especially owls.

To hear a mouse squeaking anywhere near someone who is ill is a sign that the person will die, and much of the abhorrence towards mice (who are actually far cleaner creatures than generally imagined) probably stems from the old superstition that they are the souls of people who have been murdered.

If they nibble anyone's clothing during the night, that person will suffer some misfortune, while no journey undertaken after seeing one is likely to be successful.

In Ireland boiled mice were given to infants to cure their incontinence and were also a cure for whooping cough.

Mice were used as a cure for baldness. Fill a pot with mice and leave it under the hearth for a year. You then spread the contents of the pot over your scalp. If for some reason you couldn’t wait then you moved the pot to the back of the hearth, light a fire in front of it then after six days you spread the contents onto the scalp.