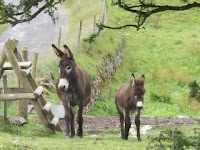 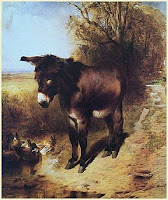 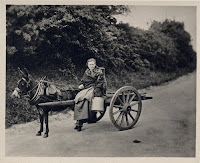 May the frost never afflict
your spuds,
may the outside leaves of your cabbage always be
free of worms,
may the crows never pick your haystack,
and may your donkey always be in foal
Old Irish Proverb


Christian tradition hold that donkeys originally had unmarked hides, and that it was only after Christ's entry into Jerusalem on the back of a donkey that they received the dark cross on their backs.

The hairs from the cross were widely believed to cure a number of ailments, and were often worn in a charm around the neck to guard against whooping-cough, toothache, fits, and to ease teething pains in babies.

Riding a donkey was also believed efficacious, especially if the rider faced the donkey's tail end, and was sometimes used as a preventative for toothache, measles and other children's complaints.

One cure for whooping-cough stated that the patient should be passed under a donkey and over its back either three or nine times; the trick of feeding an animal some of the patient's hair to transfer the illness was also used with donkeys. The donkey was also used to help cure the complaints of other animals; letting a black donkey run with mares in a field was thought to stop the mares miscarrying.

An old saying claims that no-one ever sees a dead donkey, this stems from the belief that a donkey knows when it is about to die and hides itself away. However, there is also a tradition that to see a dead donkey means great good fortune, and even as recently as this century it was considered a good-luck charm to leap over the carcass of a dead donkey three times

A pregnant woman seeing a donkey - the child will grow wise and well behaved.

When a donkey brays and twitches its ears, it is said to be an omen that there will be wet weather.

When a pregnant woman sees a donkey, her child will grow up well behaved and wise.

In Ireland Mothers would wear a strip of donkey skin and a piece of hoof around their neck as a talisman against harm.

In County Mayo they believed that the spot on a donkey’s leg was put there by Our Lady’s thumb.

If two people with the same surname get married they can cure jaundice by placing a donkey’s halter on the afflicted person and leading them to a well. The person is then made to drink the water three times from the well.

A donkey that won’t stop braying and twitching its ears is an omen that rain is on the way.

A child sitting on the back of a donkey that circles nine times will be cured of whooping cough.

Hairs from a donkey’s back cure fits, convulsions, toothache, and teething trouble in babies.

The right hoof of a donkey protects against epilepsy.

Feeding a donkey the hairs from a patient cures the patient of scarlet fever.

One of the main uses for the donkey in Ireland was for carrying turf, seaweed or milk churns and it is for this reason that it became a symbol of the Irish countryside. In 1743 an act of parliament was passed, to kill a donkey carried a sentence of death.

It was also valued for its milk as it was considered a cure for tuberculosis, whooping cough; gout and improving the skin (remember Cleopatra).

The skin of a donkey was used to make shoes, sieves and bodhráns (drums).

Today you will mainly see donkeys in the countryside but now they are usually kept as pets although sometimes you may see them pulling the little donkey cart. For me there is a sense of nostalgia and beauty at this sight.
Posted by SilentOwl at 7:07 AM