Folklore of the hedgerow. Part Two. 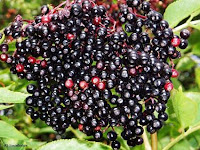 Blackthorn. Draighean. Classified in early Irish law as one of the Fodla Fedo, or Lower Divisions of the Wood.

The Blackthorn is depicted in many fairytales throughout Europe as a tree of ill omen. Called Straif in the Ogham, this tree has the most sinister reputation in Celtic tree lore. The English word “strife” is said to derive from this Celtic word. To Witches, it often represents the dark side of the Craft. It is a sacred tree to the Dark, or Crone aspect of the Triple Goddess, and represents the Waning and Dark Moons. Blackthorn is known as “the increaser and keeper of dark secrets”. The tree is linked with warfare, wounding and death, associated with the Cailleach - the Crone of Death, and the Irish Morrigan. Winter begins when the Cailleach (also the Goddess of Winter) strikes the ground with her Blackthorn staff.

The Irish cudgel is called a bata or shillelagh (see previous posts on Irish stick fighting). Although it is made from Oak, Ash or Holly it is usually made from Blackthorn, this is a hard, strong, plentiful wood that also has a very convenient knob that is formed from the root of the shrub. Its bark is especially tough and the wood was cured by burying it in a dung heap or smearing it with butter then placing it up the chimney.

Where Blackthorn grows near its sister plant the Hawthorn, the site is especially magical. Blackthorn often topped the Maypole entwined with Hawthorn, and is called “Mother of the Woods”. At New Year, celebrants made Blackthorn crowns, which they burned in the New Year’s fire. The ashes were used to fertilize the fields.

The Blackthorn has a long and often sinister history, associated with witchcraft and murder, but it is also associated with the concept of the cycle of life and death and protection not to mention its practical physical uses. It is often associated with darkness, winter, and the waning or dark moon, a particularly cold spring is referred to as 'a Blackthorn winter'.

The devil was said to prick the fingers of his followers with Blackthorn to seal their pact. It is considered the opposite of the benign Hawthorn (which is also known as Whitethorn) with which it so frequently grows. The Blackthorns spines are extremely hard and can cause a great deal of bleeding, and the wound will often turn septic. They were frequently used as pins by English witches and became known as the 'pin of slumber'. The shrub was denounced as a witch’s tool by the church and therefore the wood of the Blackthorn was used for the pyres of witches and heretics.

The thorns were also placed under horse’s saddles, by the rider’s enemies, causing the horse to throw its rider when the spines pieced the horses flesh, causing injury or death to the unfortunate rider.

The Blackthorn is also seen as a protective tree and representative of the endless cycle of life and death. For all its deadly associations the blossoms were used in ancient fertility rites as well as being hung in the bedchamber of a bride on her wedding night. It provides blossom whilst there is still snow on the ground while everything else still seems dead from its winter sleep, its dense branches protect the year’s new chicks from predation and in their adulthood provides them with food when many other species of plant have lost their berries. It is a thicket of these trees that protects sleeping beauty in her castle, and witches in northern England would carve the symbol for thorn on a Blackthorn staff for protection.

The tree itself is said to be protected by the fairy folk. It is considered a fairy tree and is protected by the Lunantishee, a type of fairy that inhabits it. They will not allow a mortal to cut Blackthorn on May 11th or Nov 11th (said to have been the original dates of Beltaine (May Day) and Samhain (All Hallows Eve) before the calendar was changed. Great misfortune will befall anyone who ignores this advice. The Lunantishee may also be the Leannán Sidhe or Fairy Lover (see previous posts).

Blackthorn wood is the traditional wood for walking sticks due to its durability and rich colour when polished. It has long been favoured by farmers along with the Hawthorn as a hedging shrub. It is also known as Mother of the woods, Dark mother of the woods, Pear Hawthorn, Wishing Thorn and Spiny Plum and of course The Sloe.

The flowers appear before the leaves in the spring, heralding the start of that season. They are a diuretic and depurative (or blood purifier), useful as a spring cleansing tonic and for skin conditions such as acne. The bark is used as an astringent and to treat fever and is also gathered in the spring. The leaves are also astringent and diuretic. The unripe fruit is used to treat acne. There is mention of combining the leaves, bark, fruits and flowers together for certain traditional cures; presumably some of these would be in dried form. The ripe fruit is traditionally gathered after the first frost, which sweetens the taste. They are used to prepare sloe gin, or as a winter fruit to add to pies and jams or to brew wine.
Posted by SilentOwl at 10:36 AM