Folklore of the Hedgerow. Part Twelve. 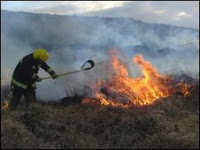 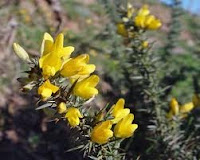 'Get a few handfuls of the yellow blossoms of the furze and boil them in water. Give the water as a dose to the horse and this will cure worms'.


The thorny nature of the plant means that it is often viewed as having protective powers.

The flowers are a deep yellow and have a pungent coconut scent. Although the main flowering period is from March to August, flowers can be found on bushes throughout the year. There are three species of furze, which all have slightly different flowering seasons, so that to the casual observer it would appear that the bush is almost always in bloom. This lengthy flowering led to the country saying:

“when the gorse is out of blossom, kissing is out of fashion.”

The habit of adding a sprig of furze bloom in a bridal bouquet is thought to allude to this, the all-year-round blossom being a symbol of continuous fertility.

Popular with bakers to whom it was sold as fuel for their ovens. It has a high concentration of oil in its leaves and branches, and so catches fire easily and burns well, giving off a heat almost equal to that of charcoal.

Older plants can carry a lot of dead wood, so furze can be a hazard in hot, dry summers. The ashes have high alkali content and can be mixed with animal fat to produce soap, or clay, to form a soap substitute. They were also spread onto the fields to improve the soil.

Furze can also be used as fodder for animals. It was said that an acre of furze could provide enough winter feed for six horses. It has half the protein content of oats. Horses and goats can strip the leaves and eat them straight from the plant, but it was usual practice to run the branches through stone mills or hit them with wooden mallets. This crushed the thorns and reduced the wood to a moss like consistency, which made it more palatable, especially to cows and sheep. The bushes were often deliberately burnt down in order to encourage new growth, the fresh sprouts of furze and grass providing easily accessible food for stock.

The bark and flowers produce a fine yellow dye. In Ireland the flowers were also used to flavour and add colour to whiskey and the Vikings were reputed to use them to make beer. They can also be used to make wine and tea.

Studies in the nineteenth century confirmed that the high alkaline content of the plant had a purgative effect. An infusion of the blooms, as a drink, was given to children suffering from scarlet fever. It was also used to cleanse the home;

‘... against fleas, take this same wort, with its seed sodden; sprinkle it into the house; it killeth the fleas”

In homeopathy furze is used to help people who have given up hope, who have no faith in the future. It puts people in touch with their own inner resources and helps them move forward by releasing courage and determination.

As one of the sacred trees, furze was included in the Celtic Beltane bonfires. The stock would be herded between these for purification and protection before being released onto the summer grazing. When this tradition diminished, torches of furze were still carried around the herds and farm buildings in order to cleanse the air and protect the animals against sterility.

Furze is closely associated with the sun god Lugh, the Celtic god of light and genius and with the Spring Equinox, at which time it’s one of the only plants in full flower. However folklore attaches it to festivals throughout the spring and summer months as a symbol of the power of the sun. In Brittany the Celtic festival of Lughnasdagh, on August 1st, is known as The Festival of Golden Gorse.

As an evergreen that flowers the whole year round, furze is seen to carry within it a spark of the sun’s life giving energy, a spark that can be seen even through the darker winter months. It is a symbol of encouragement and a promise of good things to come. Furze tells us to remain focused and optimistic, even in the darkest days. To keep hopeful and remain constant throughout the inevitable periods of difficulty we all experience.

As one of the first spring flowering plants, the furze provides a plentiful supply of pollen for bees when they first come out of hibernation. The product of the bees labour, honey, is the Celtic symbol of wisdom, achieved through hard work and dedication. The furze tells us that if we apply ourselves and keep faith in the future, we will be rewarded. However bleak things may appear there is always the possibility of periods of fertility, creativity and well being. Whilst its thorns remind us that there is protection from unwanted ideas or influences.

In Ulster eggs were dyed yellow by boiling them in water with Furze blossom. The eggs were then used in Easter games and then eaten. In other parts of the country the blossom was used to dye clothes yellow while the young shoots were used to make a green dye.

A sprig of Furze was kept in the thatch, over the door or under the rafters to bring luck into the home and in some places it was wrapped around the milk churn or butter at May time to protect it from the faeries.

In Ireland if you wear a piece of gorse/furze in your lapel you will never stumble.

The presence of furze on waste ground raises its value.

In Irish law furze was considered one of the Losa fédo or Bushes of the wood.

The top image shows the danger of Gorse/Furze/Whin fires.
Posted by SilentOwl at 3:55 AM