Folklore of the Hedgerow. Part Nine. 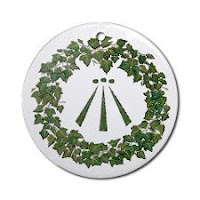 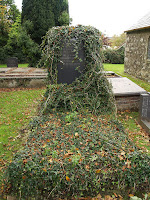 Folklore of the Hedgerow. Part Nine.

Ivy - constancy - the Latin name, hedera, derives from the Celtic word for 'cord' and Druids revere the plant and often use it in their rites.

In Irish folk medicine, the main use of ivy has been in the treatment of corns. In Ireland, burns and scalds were also treated with an ointment made from the boiled leaves and fat and it was also used to stop bleeding and reduce inflammation.

Like many other evergreens, it symbolizes the concept of eternity; a belief in everlasting life and resurrection after death. Because it is often found growing on dead and decayed trees, it came to represent the immortal soul – which lives on even after the body has returned to the earth. Yet at the same time, because it was often found in sites of death (including cemeteries and old tombstones) it was also viewed as an emblem of mortality. In some old beliefs, if ivy fails to grow on a grave, it symbolizes a restless soul; ivy growing abundantly on a young woman’s grave indicates death from a broken heart.

Like the holly, the ivy is one of the plants found in the Celtic Tree Calendar, where it is known as Gort. Perhaps it was the Celts who influenced the Roman ivy “party head wreaths”… for the Druids would wrap their heads with ivy to represent clarity of thought.

The botany of the ivy plant has clearly influenced its symbolism: amongst its various meanings, ivy represents connections and friendships, undoubtedly influenced by the plant’s natural tendency to weave and intertwine during growth. Such connections often play an important role in our celebrations as we reach out to family and friends, to recall cherished memories and create new ones.

Ivy was used in love divination at Samhain.

Ivy was also used for death divination at Samhain. You nominate an unblemished leaf for each member of the family; each person puts their leaf in a glass of water to stand overnight. In the morning if the leaf was still unblemished then you were sure of life for the next year. However, if your leaf had spots on it then you would not see the next Samhain.

In Ancient Egypt the ivy was sacred to Osiris, and a safeguard against evil.


The following is an old Irish story concerning Ivy

One evening late in November, which is the month when spirits have most power over all things, as the prettiest girl in all the island was going to the well for water, her foot slipped and she fell, it was an unlucky omen, and when she got up and looked round it seemed to her as if she were in a strange place, and all around her was changed as if by enchantment. At some distance she saw a great crowd gathered round a blazing fire, and she was drawn slowly on towards them, till at last she stood in the very midst of the people; but they kept silence, looking fixedly at her; and she was afraid, and tried to turn and leave them, but she could not.

Then a beautiful youth, like a prince, with a red sash, and a golden band on his long yellow hair, came up and asked her to dance.

Then he lifted his hand and made a sign to the people, and instantly the sweetest music sounded near her and around her, and the young man took her hand, and they danced and danced till the moon and the stars went down, but she seemed like one floating on the air, and she forgot everything in the world except the dancing, and the sweet low music, and her beautiful partner.

At last the dancing ceased and her partner thanked her, and invited her to supper with the company. Then she saw an opening in the ground, and a flight of steps, and the young man, who seemed to be the king amongst them all, led her down, followed by the whole company. At the end of the stairs they came upon a large hall, all bright and beautiful with gold and silver and lights; and the table was covered with everything good to eat, and wine was poured out in golden cups for them to drink.

When she sat down they all pressed her to eat the food and to drink the wine; and as she was weary after the dancing, she took the golden cup the prince handed to her, and raised it to her lips to drink. Just then, a man passed close to her, and whispered--

"Eat no food, and drink no wine, or you will never reach your home again."

So she laid down the cup, and refused to drink. On this they were angry, and a great noise arose, and a fierce, dark man stood up, and said--

"Whoever comes to us must drink with us."

He seized her arm, and held the wine to her lips, so that she almost died of fright. But at that moment a red-haired man came up, and he took her by the hand and led her out.

"You are safe for this time," he said. "Take this herb, and hold it in your hand till you reach home, and no one can harm you."

He gave her a branch of a plant called the Athair-Luss (the ground ivy). This she took, and fled away along the sward in the dark night; but all the time she heard footsteps behind her in pursuit. At last she reached home and barred the door, and went to bed, when a great clamour arose outside, and voices were heard crying to her--

"The power we had over you is gone through the magic of the herb; but wait--when you dance again to the music on the hill, you will stay with us for evermore, and none shall hinder."

However, she kept the magic branch safely, and the fairies never troubled her anymore; but it was long and long before the sound of the fairy music left her ears which she had danced to that November night on the hillside with her fairy lover.

Hope you enjoyed the story.
Posted by SilentOwl at 2:05 PM